Shani Shingnapur, 160 kilometers from Pune, marks an important place in Maharashtra's pilgrimage tour due to the God Shani or Shanaishwara temple. In the temple, God Shani is worshiped in form of unique looking black stone is his swayambhu form; standing tall on an open platform. A ‘trishul’ as well the statue of ‘Nandi’ (bull) further flanks the main idol of Shani. Two small images, one of Shiva and the other of Hanuman, complete the tableau.

Many fables and tales associated with the Swayambhu Shanaishwara statue of the temple. And according to one of them, the statue was brought down by the turbulent current after a heavy bout of rain and flood. Shepherds group noticed the temple and when one of them tried to touch it with a pointed rod, blood started oozing from it. Watching this, the shepherds apparently got scared and immediately rushed to their respective works. On the same night, a Shanaishwara appeared in the dream of the most devoted and pious of the shepherds and stated that he wished to stay in that village in the same form and without a roof above him. And Shanaishwara even promised that if they accepted his wish, there will be no cases of theft in the village. Since then the stone is worshiped as Lord Shani. It’s this temple that strengthens the local tradition of not installing doors and locks to the village houses.

As per the locals, Swayambhu Shanaishwara statue came into existence since the start of Kali-yuga, but the east-facing multi-deity temple was built years later. However, the popularity of the shrine has increased tremendously only over the past 20-25 years. In the temple, there is a tomb of Saint Udasi Baba and a temple dedicated to Dattatray.

Lockless Village where God is Guardian

Another unique feature of the temple is that here devotees can perform religious rituals like ‘pooja’, and ‘abhishek’ on their own. Even devotees can themselves offer oil and ‘udid’(black gram) to the god. Also, there are no doors for any of the establishments in the village. In fact, the UCO Bank opened a ‘lockless’ branch in this village, the first-of-its-kind in the country in January 2011.

Festivals like Shani Amavasya, Gudi Padava, and Shri Shaneshchar Jayanti are celebrated with pomp and show in the temple and thus are the best time to visit the temple. On every Ashadi Ekadashi, a Shaneshwar Palki procession is taken on foot, which also attracts a good number of devotees from different corners of the world. A similar procession takes place during Ekanaathi Shashti from Shanishingnapur to Paithan. Also, a fair is organized during these days. 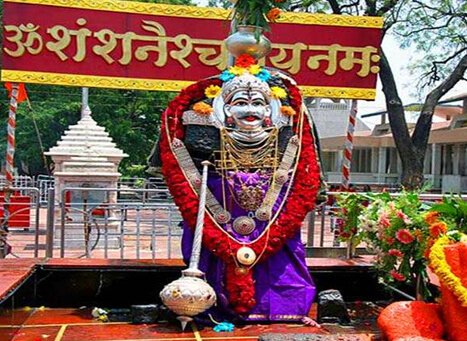 Railway station in Pune is the closest station to reach Shani Shingnapur. Tourists can also avail regular bus service from the nearby places like Pune, Ahmednagar, and Ghodegaon.