One of the Ashtavinayak Temples of Maharashtra; the abode of the Pandavas - all these and much more are some of the laurels associated to the Shri Girijatmaj Lenyadri Ganpati Temple. Legend has it, Shri Girijatmaj Lenyadri Ganpati Temple was the same place where Goddess Parvati meditated for 12 years for a child. That's how Ganesha was born. And it is from the same incident the temple is known as ‘Girijatmaj’ - ‘Girija’ meaning Devi Parvati and ‘Aatmaj’ meaning son.

To reach the main sanctum of the temple, pilgrims will have to climb a flight of 338 stairs. Right in front of the temple, there are two water reservoirs that remain covered with water. There are approximately eighteen rooms in the main temple hall (also known as Sabhamandap), which were used by saints for tapascharya. In one of the rooms, tourists can find the rock statue of Shri Girijatmaj Lenyadri Ganapati. All the 30 Lenyadri Caves including the Shri Girijatmaj Lenyadri Ganpati Temple is under the control of the Archaeological Survey of India. Do not miss to buy the locally harvested grapes, black raisins, Sapottas (Chikus) at the base of the mountains.

When it comes to Shri Girijatmaj Lenyadri Ganpati Temple, the structure forms an arresting work of art while the landscape provides the frame. Thus, forming beautiful painting that attracts a good number of not only the pilgrims but historians too. Moreover, it has many laurels attached to it like the only Ganesha temple tucked in the caves; the abode of the Pandavas and the spot where goddess Parvati prayed for 12 years for a child. And that's how Lord Ganesha was born. Even the name of the temple - ‘Girijatmaj’ - ‘Girija’ meaning Devi Parvati and ‘Aatmaj’ meaning Son is derived from this incident.

The scenario from the temples looks so beautiful that it ultimately sparks reactions. But its view is limited to rare people as it takes tourists to climb 338 steps to reach the main temple. In the main hall (also known as Sabhamandap) of the temple, there are 18 rooms, and in one of them, there is a rock cut south facing Ganpati idol with a trunk on the left. Also, worth noticing is a sacred well, which remains brimming with water throughout the year. There are huge entry gates right at the entrance of the temples with enormous pillars, each with a carving of its own. The unique thing about 'Sabhamandap' is that it is not supported by pillars.

Explore the Nearby Caves

After seeking blessings of god at the main temple, tourists should visit the neighboring 6th cave and the 14th cave, which has Buddha pillars, commonly known as Bouddha-Stupa. Also, worth noticing is the main sanctum, which has beautiful paintings of Shri Guru Dattatray, Lord Ganesh resting on Shiv-Parvati’s lap, Bal Ganesh playing an ancient game.

Bhadrapad (August – September) and Magh Chaturthis are celebrated with full pomp and show in the Shri Girijatmaj Lenyadri Ganapati. A grand celebration in the form of cultural programs is also organized during the Ganesh Jayanti and Ganesha Chaturthi. 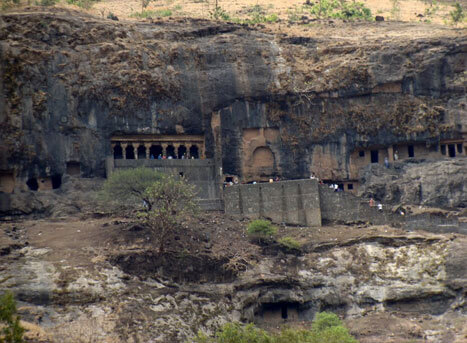 From Junnar, rickshaws, jeeps, and buses are available to Lenyadri.

Since the temple is located at a quite high elevation, tourists will have to climb 338 stairs to reach the main sanctum. For old age people, palanquin facility is also offered by the temple authorities. Currently, the temple under the control of Archaeological Survey of India.