One of the most popular ashtavinayakas (8 Ganeshas) of Maharashtra, Shri Mayureshwar Mandir is the foremost center of worship for the members of Ganaptya sect because of it having a strong association with the Morya Gosavi. According to the Hindu mythological records, the temple was the place where Sindhu was killed by Lord Ganesha. Devotees of the temple firmly believes that the ashtavinayaka pilgrimage circuit is incomplete without a visit to Morgaon.

Tales and Fables Associated with the Temple

According to the legends, Ganesha was born in Treta Yug with a purpose to kill Sindhu, the son of Chakrapani, the king of Mithila, and his wife, Ugra. It is said that Ugrcoa conceived due to the power of a solar mantra, but was unable to bear the extreme heat radiating from the fetus, so she abandoned it in the ocean. Soon, a son was born out of the abandoned fetus and returned him his grieving father, who named him Sindhu.

When Sindhu was born, he got a boon from the sun god in the form of an ‘amrit’ (nectar), which he swallowed immediately. And that is how he got power to terrorize people. People were scared of his deadly acts and decided to take help of Lord Ganesha, who then cut open Sindhu's body, emptying the amrita bowl and thus killing the demon.

Features of the Temple

Another unique aspect of the temple is its architecture, which has a strong influence on Islamic style. There are four gates to enter the temple, each adorned with the image of Ganesha. Right in front of the temple, there is a six feet sculpture of mouse. Also, there is an assembly hall (sabha-mandapa), which features the idol of Vishnu and Lakshmi. The main hall leads to the central hall, the place where one can find the garbhagriha (sanctum). In the main sanctum, there is sitting Ganesha idol with trunk towards the left. The image of Ganesha in the sanctum has four hands carrying ‘pasha’ and ‘ankush’ in two hands. One hand rests on his knee and the other carries a ‘modak’. 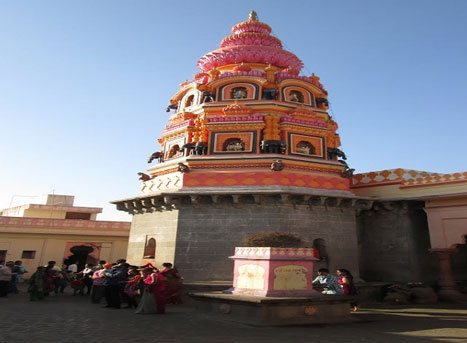 On a visit to the Shri Mayureshwar Mandir, make a point to visit the following attractions like