Sikhism, the youngest of the world religions, is barely five hundred years old. Its founder, Guru Nanak, was born in 1469. Guru Nanak spread a simple message of "Ek Ong Kar": we are all one, created by the One Creator of all Creation. This was at a time when India was being torn apart by castes, sectarianism, religious factions, and fanaticism. He aligned with no religion, and respected all religions. He expressed the reality that there is one God and many paths, and the Name of God is Truth, "Sat Nam".

Guru Nanak's followers were Sikhs (seekers of truth). He taught them to bow only before God, and to link themselves to the Guru, the Light of Truth, who lives always in direct consciousness of God, experiencing no separation. Through words and example, the Guru demonstrates to followers how to experience God within themselves, bringing them from darkness into light. Guru Nanak was a humble bearer of this Light of Truth. He opposed superstition, injustice, and hypocrisy and inspired seekers by singing divine songs which touched the hearts of the most callous listeners. These songs were recorded, and formed the beginnings of the Sikhs' sacred writings, later to become the "Siri Guru Granth Sahib".

His way of life :

Nam Japa - To get up each day before sunrise, to clean the body, meditate on God's Name and recite the Guru's hymns to clean the mind. Throughout the day, continuously remember God's Name with every breath.

To work and earn by the sweat of the brow, to live a family way of life, and practice truthfulness and honesty in all dealings.

To share the fruits of one's labor with others before considering oneself. Thus, to live as an inspiration and a support to the entire community.

The foundation of Sikhism was laid down by Guru Nanak. Guru Nanak infused his own consciousness into a disciple, who then became Guru, subsequently passing the light on to the next, and so on. The word "Guru" is derived from the root words "Gu", which means darkness or ignorance, and "Ru", which means light or knowledge The Guru is the experience of Truth (God).

Each one of the ten Gurus represents a divine attribute:

Guru Gobind Singh, the Tenth Guru, exemplified the Sikh ideal of the Soldier-Saint. He was also an inspired and prolific writer, courageous warrior, and a source of Divine Wisdom to his Sikhs. "When all other means have failed," he said, "only then is it righteous to take up the sword." He was the defender of the poor, the meek, and the oppressed masses of India. 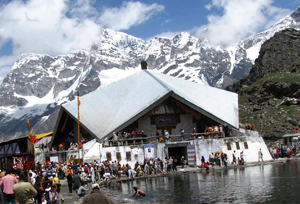