Standing tall on a hill against the backdrop of the crystal blue Konkan coast, Kunakeshwar Temple is a highly revered Hindu temple of Maharashtra. The sound of the waves in synchronization with the music of the bells makes it a perfect place to experience absolute tranquility. For sure, there is no other place to be in Maharashtra, that can fill your heart with so much tranquility and peace.

The Legends of Kunkeshwar Temple

Due to it's to the coast, Kunkeshwar temple has been fortified with a 10-meter stone wall. Many tales are associated with the history of the temple. And according to one of them, there was a cow in the jungle of Kunaki, who used to shower her milk on a stone. After watching this act repeatedly, the angry owner of the cow hit the stone with the hammer. But then blood started streaming out of it. He soon realized that the stone is associated with some unique phenomenon and started praying it. That's how the temple came into existence and came to be known as the abode of Lord Kunakeshwar.

As per the another story associated with the construction of the temple, a ship of Iranian sailor got trapped in a cyclone, off the coast. A light on the lamp of the shore captured his attention and he started praying to the source of the light to escape from this situation. He promised to build a temple there. After some time, his ship came at the seashore without any problem. As promised, he then started making a temple. A lingam was already there on the hill. As sailor was non-Hindu, he thought that his religion will not accept him after making the temple. Therefore he committed suicide from the top of the temple. In the temple complex, one can see a tomb that was constructed in the memory of the sailor.

Somewhere like its exteriors, the interiors are equally impressive. Six ‘deepmalas’ and an idol of Nandi on a platform welcomes the devotees to the temple. On the main spire of the temple, there are sculpted images of Gandbherund and Kamdhenu. Kunakeshwar is a Shiv Panchayatan temple, thus here one can see ‘shivpindi’ and an icon of Parvati. Ganesha image in the temple has three hands.

Apart from the visit to the temple, tourists can go to the coast for swimming. Also, there are good chances of spotting dolphins.

Shivratri is celebrated with great zeal and zest in the temple. Good number of devotees from different corners of the world visit the temple specially on Shivratri. 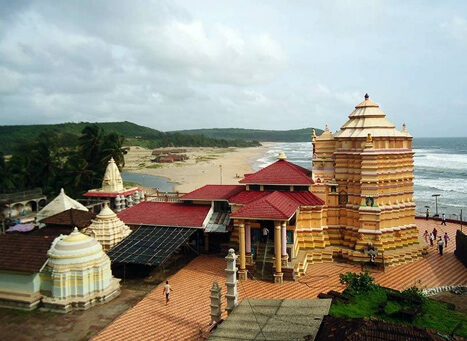 To travel within the city, tourists can take a bus from the neighboring cities. Nearest railway station from the temple is Nandgaon(45 Km), and Kankvali (52 Km). From the railway station, and bus stop, the transport facility is easily available to reach the temple.

Owing to its location, which is next to the Konkan coast, there are many places to visit around the Kunkeshwar. So whenever, on a visit to Kunkeshwar temple, do visit the following places: