A face of Indian independence movement, Dagdusheth Halwai Temple was built by Shri Dagdusheth Halwai and his wife, Lakshmibai when they lost their son due to a plague epidemic. Since its inception, the temple has been celebrating Ganapati festival with deep faith and enthusiasm. And later, Lokmanya Tilak made the Ganapati festival a public celebration to bring people together for freedom struggle. To continue the tradition of celebrating in full swing, a trust was established - Shreemant Dagdusheth Halwai Sarvajanik Ganapati Trust. Trustees of the organization keep on taking up the activities of the festivals with exemplary integrity and dedication.

Like its history, the temple architecture is equally magnificent. The marble statues of Jay and Vijay catches a lot of attention. Inside the sanctum of the temple, there is a 7.5 feet tall and 4 feet wide Ganpati idol, decked up in 8 kilos of gold. According to the trustees, the Ganesh idol is insured for a sum of ₹10 million (US$150,000). When on a visit to the temple, make a point to try some sweets from Dagdusheth halwai sweets.

The Temple Takes its Festivities way too seriously

Locals say, there are fewer temples in Pune that celebrate Ganesh Chaturthi the way Dagadusheth Halwai Ganapati Temple does. The temple is mainly known for the Ganapati festival that is celebrated with pomp and show. In the past, Ganesh Chaturthi celebration was used as a platform by Lokmanya Tilak to bring people together for freedom struggle.

History Associated with the Temple

Dagadusheth Halwai, the founder of the temple, was a famous confectioner. In the late 1800s, Dagadusheth Halwai lost his son to plague epidemic. After the death of his son, Dagadusheth Halwai's wife get into depression. At that time, Shri Madhavnath Maharaj recommended building a Ganesh temple. And it was finally completed in 1983. It is said that the idea of celebrating Ganesh festival was of Lokmanya Tilak.

Grandeur at its best

The marble laid structure of the temple is also worth all visitors attention. Ganesha idol in the main sanctum is 7.5 feet tall and 4 feet wide and adorned with 8 kilos of gold. The current estimate of the idol is whopping ₹10 million (US$150,000). Every now and then, devotees are seen offering gold and other precious metals and stones. When on a visit to the temple, do make a point to attend daily pooja, abhisheka, and the aarti. 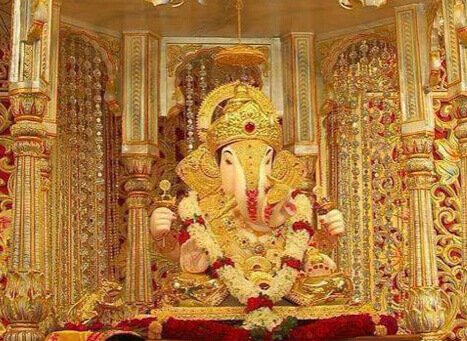 Authorities of Dagadusheth Halwai Ganapati Temple take their festival celebrations way too seriously. And that's when tourists can see the temples in full swing. For the complete list of celebrations that takes place in the temple is mentioned below.

To reach the temple, pilgrims can take any mode of transport from anywhere in Pune; be it city-owned buses, auto-rickshaws, or private taxi.

A trip to Pune is incomplete without a visit to Dagadusheth Halwai Ganapati Temple; especially for people on a pilgrimage tour to Maharashtra. After a visit to the temple, go to the nearby attractions of Pune like: