Believed to be created by Lord Vishnu, Siddhatek is one of the eight pious Ganesha temples in Maharashtra. Located on the top of a hill amidst the thick foliage of Babul trees, Siddhatek temple is easily accessible by car or boat from Shirapur, a small village in the Pune district. Here, devotees are often seen performing radakshina (Circumambulation) of the hillock seven times so as to propitiate the deity, even when there is no road or cemented pavements.

History Behind the Temple

The history behind the temple goes like this- once Lord Brahma became so much conscious of one's own dignity that he decided to make the earth. But then he started facing many problems. That's when Lord Brahma evoked Lord Ganesha and worshiped him for so many days at the same place where the temple stands for a smooth journey ahead.

There is an another story associated with this temple, which says that when Brahma started creating the universe, two demons named Madhu and Kaitabha took birth from the dirt in Vishnu’s ear. Madhu and Kaitabha used to disturb Brahma a lot, thereby compelling Vishnu to wake up from his deep slumber. That's when Vishnu pitched a battle against the demon but couldn't defeat them because he couldn't seek blessings of Lord Vishnu in the beginning. Then, Vishnu performed penance at Siddhatek. Pleased by the prayers of Lord Vishnu, Ganesha gave him some. Lord Vishnu used those to slay the demons. The place where Vishnu acquired ‘siddhis’ was thereafter known as Siddhatek.

Even the main members of Ganapatya, a sect that worships Ganesha as the Supreme Being, Saint Morya Gosavi (dated between 13th to 17th century), and Narayan Maharaj, have worshiped in this temple to attain siddhi.

Features of the Temple

Ahilyabai Holkar, the queen of Indore and Sardar Haripant Phadke, built the main chamber of the temple, which features main sanctum and paved doorways. Idol in the sanctum is three feet high in a seating position. An interesting feature of the idol is that unlike other Ganesha statues, here the trunk is on the right, which is considered as a powerful sign. And that's the reason why the temple is known as ‘jagrut kshetra.’ Like other Ganesha temple, here too tourists can see the brass statues of ‘Jaya-Vijaya’ – the gatekeepers of Vishnu’s abode – flanking the central icon of Siddhi Vinayaka. The outer hall (also known as sabha-mandapa) was completely ruined in 1939 and rebuilt in 1970.

There is only one 'ashtavinayaka' in Ahmednagar and that is Siddhatek. So on a trip to Ahmednagar, a visit to Siddhatek shouldn't be missed. Though the temple can be visited throughout the year but the best time to visit is during fairs held ob Vijayadashami and Somavati Amavasya.

Festivals like Ganesh Chaturthi, Bhadrapad and Magh chaturthi are celebrated with great pomp and show at Siddhatek. Also, the fair organized held on Vijayadashami and Somavati Amavasya are the best time to visit the temple. 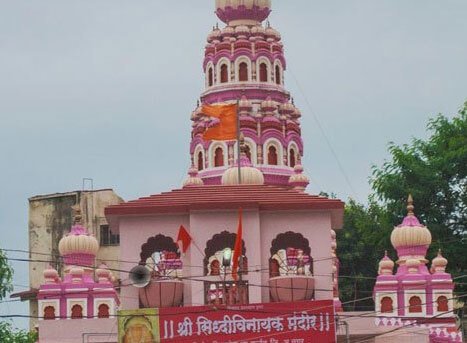 To reach the temple, get down at Siddhtek, from where one can take a bus. Also, boat facility is also available from Siddhtek to reach the main temple. If traveling train, the nearest railway station will be the Daund Junction. From the junction, take a bus to reach the Siddhtek.

On a trip to Siddhatek, if have extra hours or day at disposal, make a point to visit some nearby attractions like: