Aundha Nagnath Temple is an ancient temple of Shiva located in the district of Hingoli, Maharashtra, India. It is also considered as one of the Jyotirlinga.

The total temple campus is spread over an area of 60,000 sq. ft, the temple height is 60 ft and covers area of 7200 sq. ft. There are many other things to witness apart from its religious significance. The unbelievably beautiful carvings present in the temple are worth seeing. The architecture which the temple is presently made of is Hemadpanti architecture style. On the pious occasion of Vijayadashami and Maha Shivaratri, a large number of pilgrims come to visit this place.

The temple is very closely associated with the lives of saints like Visoba Khechara, Namdev and Jnanesvar. Namdev went to Jnanesvar temple where he was instructed to visit Aundha Nagnath Temple to search for a proper guru. There in the temple he found Visoba Khechara who was resting his feet on the lingam, seeing to which Namdev reproached Visoba and told him that he has insulted Lord Shiva. Then Visoba asked him to put his feet somewhere else and wherever he kept Visoba’s feet a linga came up. This way with the help of his yogic powers, he filled the entire temple with Shiva lingam. He also taught Namdev about the omnipresence of God.

Another famous story is related to this temple. Once Namdev along with his gurus, was singing Bhajans in front of the temple, he was asked by the temple priest to stop singing as he is disturbing the routine puja. The priest insulted Namdev by telling him that he belongs to a lower caste and is not allowed entering the temple. After this Namdev went to the backside of the temple and started singing the bhajans again. Since God also wanted to be in sight of the devotee and wanted to listen to the bhajans, he revolved the entire temple which is why Nandi is always seen at the backside of the temple.

Guru Nanak who is known as the founder of Sikhism when travelled this area also visited the temple and also saw the birth place of Namdev, Narsi Bamani.

Located at Aundha Nagnath in Hingoli district of Maharashtra, India, this temple is said to be the eighth Jyotirlinga of the twelve Jyotirlinga present in India. It is also considered to be one of the important places of pilgrimage in India. The temple is reckoned to have been built by Seuna or Yadava Dynasty which dates back to 13th century. It is also said that the very first temple belongs to the time of Mahabharata which was built by Yudhishthira who was the eldest of the Pandavas. He built the temple when all 5 pandavas were sent into exile for 14 years from Hastinapur. Before Aurangzeb attacked this temple, it was said to be a seven storied building.

Reaching the temple is not a difficult task as one can go by bus and train to Hingoli. Many buses are available from Pune, Aurangabad, Mumbai and Nagpur. 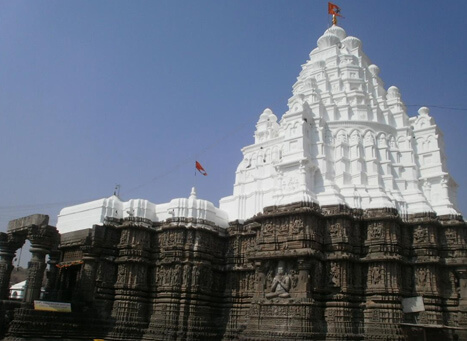 Things to Do in and around

Every year in the Hindu month of Magha a fair is held near this temple which is visited by a number of pilgrims and devotees. The fair lasts till the beginning of the Hindu month of Phalguna. Apart from that one can attend different types of puja and occasions which are celebrated with great vigour.

There is no entry fee asked to enter the temple, however one needs to pay for doing the puja.

The best time to visit he temple is during the occasions of Ekadashi, Vijayadashami and Maha Shivaratri when a large number of devotees come to visit this pilgrimage. Apart from that one can come during the morning and evening aarti to have a peaceful and spiritual feeling.

Where to Stay in Hingoli?