"There is a polish for everything that takes away rust; and the polish for the heart is the remembrance of Allah." - Sahih al-Bukhari.

Ajmer Sharif in Rajasthan Islam, the term means 'submission to the will of God' and the religion means 'peace, mercy, forgiveness and faith in one God who is above all, who is eternal'. Being the second largest spread religion, Islam is all about having faith in one God and his several messengers (prophets), who spread the words of the almighty. These words carry the whole essence of the beautiful world gifted by the God, by; Allah, along with the preaching on how the mankind should lead its life. Further, those divine human souls who selflessly believe and practice the Islamic religion are known as Muslims.

The Five Pillars of Islam

Shahadah: reciting the Muslim profession of faith from the bottom of the heart
Salat: reciting the prayers five times each day
Zakat: doing charity for helping the poor and the needy
Sawm: fasting during the month of Ramadan
Hajj: pilgrimage to Mecca at least once in a lifetime

These pillars are basically the most important Muslim practices that draw the ground of the respective religion and these practices are a must for every Islamic follower.

Prophets - The Messengers of God

A very important prophet who not just brought the message of the God, but actually gave birth to the religion 'Islam' was "Prophet Muhammad". Complete name Abu al-Qasim Muhammad ibn 'Abd Allah ibn 'Abd al-Muttalib ibn Hashim, Prophet Muhammad was a man among the men. He was born in 570 at Mecca, Saudi Arabia and it is his life and deeds that defined Islam.

In Muslims if there is any perfect ethical character, it is the Muhammadan character. He was very close to the economically poor people, and did everything that he could to help them out. Further, he led a very simple life, which was completely devoted for serving the human race and for worshiping Allah. Though Prophet Muhammad was the one who founded Islam, but he was not the only messenger of God, there were many more. As per Quran (the holy book of Muslims) Hazrat Adam Alaihis Salam, Hazrat Nooh Alaihis Salam, Hazrat Ibrahim Alaihis Salam, Jacob, Hazrat Musa Alaihis Salam and Hazrat Isa Alaihis Salam and his apostles, all were Muslim prophets. The reason behind why these men (irrespective of their different religion) are regarded as God's holy Muslim messengers is because they devoted their entire life just for spreading the teachings of the almighty and even their deeds included the nitty-gritty of the five pillars of Islam (like praying, charity, fasting and pilgrimage).

India being a nation that embraces vibrant colors of almost every religion is one of the best countries to experience Muslim pilgrimage. Although Mecca, which is located in Saudi Arabia, is regarded as the main pilgrimage site, India also has several pious Muslim destinations. Dargah Hazratbal in Jammu & Kashmir, Ajmer Sharif (The Dargah of Khwaja Moin-ud-din Chishti) in Ajmer and Haji Ali Dargah in Mumbai are the most popular Muslim pilgrimage destinations in India. Every year these Muslim pilgrimage sites are thronged with devotees. The best part is that it is not just Muslims who pay homage at these pious places, people from different religious backgrounds come and bow their head down. These destinations offer the visitor a peace they always wanted. Along with this, they also get a chance to connect with the history of Islam, which further enlightens their soul.

At Tour My India, we understand and respect every religion and Islam is no exception. We provide the best Muslim pilgrimage tour packages that give you the delight of soaking in the true essence of the pious destinations. Our expert tour guides not just take you to the sites, but also make you understand the bona fide meaning of Muslim pilgrimage in India. 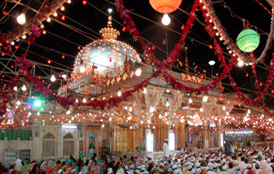 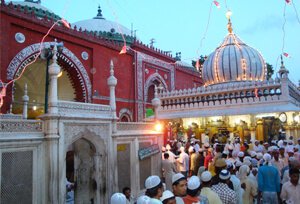 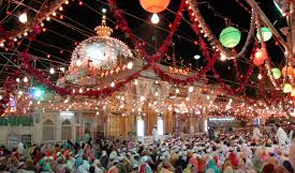