One of the 'Panj Takht,' a holy shrine of Sikh, Hazur Sahib Nanded is the place where the Guru Gobind Singhji, the tenth of the 11 Sikh gurus, held his final congregation. Hazoor Sahib Nanded was established way back in 1609 by Guru Hargobind. Like Harmandir Sahib of Amritsar, Hazur Sahib too is covered with a golden plate. Inside the Gurudwara, there is an inner room called the Angitha Sahib, built at the same place where Guru Gobind Singh was cremated in 1708. Many belongings of Guru Gobind Singh like a golden dagger, a matchlock gun, an archer with 35 arrows, two bows, a steel shield studded with precious stones, and five golden swords are very well -preserved here.

Sprawling over several hectares, the Hazoor Sahib complex features two building - Bunga Mai Bhago, a large room where tourist scan find Guru Granth Sahib and possessions of Guru Gobind Singh like golden dagger, a matchlock gun; quiver with 35 arrows; two bows; a steel shield studded with precious stones and five golden swords. The second room is Angitha Sahib, which was built in 1708 at the same place where Guru Gobind Singh was cremated. Like Harmandir Sahib in Amritsar, Hazur Sahib too has gold plated domes, and on the pinnacle is a ‘kalash’ made of gold-plated copper.

Most interesting part of the gurudwara is its laser show, which takes place every evening. Directed by Jasbir Singh Dham and voiced by Ghazal singer Jagjit Singh, the show described the lives of the ten gurus. The show timings are 7:30 pm to 8:30 pm daily. Make a point to eat “Guru ka Langar,” food served in the Gurdwara.

History of the Gurudwara

The holy place where Guru Gobind Singh held his final congregation, Hazur Sahib Nanded is one of the Panj Takht Gurudwara of Sikhism. According to the legends, Guru Gobind Singh arrived in Nanded in 1708, August end. Later, he went to Golconda too but then he decided to make Nanded as his abode forever. It was this same place where Bahadur Shah was stabbed by two men who had been commissioned by Wazir Khan, the ‘faujdar’ of Sirhind, to assassinate him.

Foreseeing the scenarios, Guru Gobind Singh asked to install the Guru Granth Sahib, thus the place came to be known as the ‘Takhat Sahib.’ Beautiful gold plated building of the Hazoor Sahib was constructed under the guidance of Maharaja Ranjit Singh. It is said that it took five years to complete the structure of the Gurudwara. The gurudwara is also reverved as "Sachkhand Sri Hazur Abchal Nagar Sahib."

To witness the Gurudwara in its full swing, tourists should visit during the Sikh festivals. Every evening, a laser-ray show takes place near the main gurudwara. Through the show, tourists are told about the lives of the ten Gurus. The show has been conceived and directed by Jasbir Singh Dham while the music and commentary is by ghazal singer Jagjit Singh. The show timings are 7:30 pm to 8:30 pm daily. 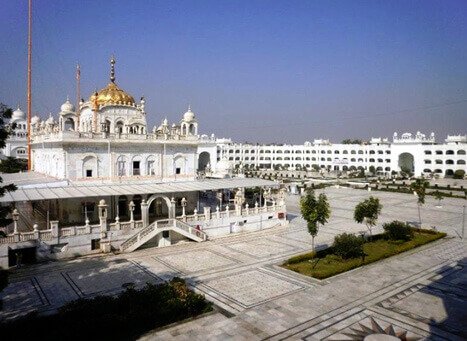 Nanded has a good transportation system. To approach the Gurudwara from any place in the city, rickshaws and taxis are easily available. Also, there are buses that are reasonably priced fairly punctual.

When on a visit to the Nanded Gurudwara, make a point to cover the following tourist attractions of the regions like:

Also, if tourists are visiting Nanded via airways then a stopover at the Aurangabad is a must. In Aurangabad, tourists can visit the places like Ajanta Caves, Ellora Caves, Grishneshwar Jyotirlinga Temple, Bibi Ka Maqbara, Bhadra Maruti, to name a few.