One of the incredible India's great 12th ‘jyotirlinga, Grishneshwar is an ancient temple, sacred to Lord Shiva. Ghrushneshwar temple is the last among India's revered Dwadash (twelve) Jyotirlinga shrines of the Hindu. Built somewhere in the 18th century, the red stone structure of the temple, composed of a five-tier ‘shikhara,' is the smallest 'jyotirlinga' temple in India. As per one of the stories in Padma Purana, Lord Shiva stayed in the form of a ‘linga’ on the request of his most devoted lady, Ghrushna.

That’s how the temple came into existence

The history behind the temple goes lies this that there was a lady called Ghrushna, whose son was killed by her sister. She then started praying Lord Shiva with complete devotion. Pleased by the devotion of Ghrushna, Lord Shiva appeared to bless her with a son. On request of Ghushma, Shiva resided there eternally in the form of Grishneshwar Jyotirlinga. And that how the temple got its name.

Grishneshwar Temple is often referred as ‘Kusumeshwar.’ As per the historical records, Rashtrakuta king of the 8th century, Krishnaraj, who has also created the world-famous Kailas Temple of the Ellora Caves, built the temple. Malojiraje Bhosale, the grandfather of Chhatrapati Shivaji, reconstructed the temple, and the Shivalaya Tirtha Kunda in 1599 CE.

The structure of the south facing temple is grand and evidence behind it is the ‘dakshinabhimukh’ (main entrance) that stands tall on a platform. Around the temple, there is a huge courtyard with three ‘dwaras’ - one ‘mahadwara’ (main entrance) and two ‘pakshadwaras’ (side entrances). At the entrance of the temple, there is a small shrine of Kokila Mata. There are two chambers in the Grishneshwar temple - sabhamandapa, and garbhagruha.

Note this: Photography is strictly not allowed in the temple. To enter the temple, male devotees will have to remove their upper garment. It is made of red stone with four entrances and 56 steps on each side. There are eight temples of eight different ‘tirthas’ near it.

Ghrushneshwar Temple is one of the 12 Jyotirlingas and remains decked up during the special occasions like Mahashivaratri, and Shraavana ( a month of the Hindu calendar). During Mahashivaratri festival, a special palanquin possession takes place from the temple to Shivalaya Tirth Kund. On Vaikuntha Chaturdashi, the 14th lunar day of the waxing moon fortnight, a special function is organized at the temple during which Shiva is offered ‘tulsi’ leaves, a favorite of Lord Vishnu. Besides, the temple attracts a good number of devotees on Monday.

See below for complete schedule: 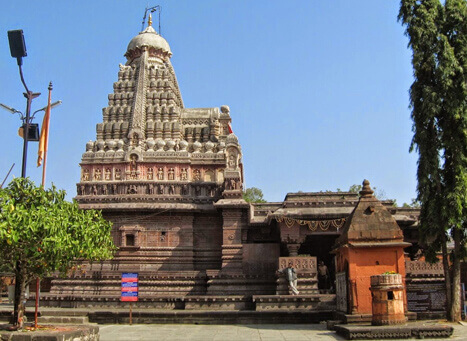 See below for complete schedule:

When on a pilgrimage tour to Ghrushneshwar temple, do visit Ajanta and Ellora Caves, which are deemed as the UNESCO world heritage site. Hardly a kilometer away from the temple, 12 Buddhist, 17 Hindu and 5 Jain caves at Ellora are the testaments of the architectures created between 5th and 10th century. Ajanta Caves, which are 100 kilometers away from the temple, are known for Buddhist rock cut caves, embellished with elaborative sculptures and paintings that depict about Buddhist mythology and deities.

Else, tourists can also visit some famous attractions of Aurangabad like: