One of the best-known Hindu temples in Pune is Vigneshwara Temple, situated on the bank of Kukadi river. Vigneshwara Temple honors of Ganesha. As per the historical records, Lord Ganesh made Ozar his permanent abode after defeating a demon called Vighnasur. And that is how the temple got its name. The architecture of the temple is equally beautiful, there is huge courtyard made out of stone and fortified pathways. In the main sanctum of the temple, there is an idol of Ganesha in the seating position. The best time to visit the temple is between Bhadrapad, Tripuri Pournima, and Magh Chaturthi when a fair is organized here.

Stories Associated with the Temple

According to some mythological books like Mudgala Purana, Skanda Purana and the Tamil Vinayaka Pura, the history behind the temple goes like this: King Abhinandana performed a sacrifice in which he didn't give any offering to King Indira. Furious by his act, Indra ordered Kala (Time/Death) to destroy the ‘yadnyas’ of Abhinandan, and thus provided him with all his power along with granting him the boon of immortality. Kala then took the form of demon Vignasura (obstacle-demon) or Vigna (obstacle), started creating problems in the sacrifice. The strong demon then not only destroyed the yadnyas but also all the ‘vaidik’ rituals as were practiced at that time. Scared by the actions and reactions of Vignasura, sages started worshipping Ganesha, who then began a battle against the demon. Vignasura soon realized that it was impossible to win a battle against Ganesha. Thus, Vignasura decided to surrender and even assured that he would never create a problem in any sacred ceremony. Vignasura also requested Ganesha to associate his name with that of the demon. And that's how the temple got its name.

The existing temple has a spacious courtyard that can be reached by crossing the fortification wall and a pathway. The temple was constructed on the principles of Vastu Shastra during the era of the Peshwas. Also, the temple has a central hall with two doors- one one the north while other on the south. Alongside the central hall, there is yet another hall, crowned with a 10 feet height ceiling. What is also interesting is the spire with intricate carvings, said to have been constructed by Chimaji Appa. In the main sanctum, there is an idol of Ganesha in the sitting position with a trunk on the left. Vigneshwara Temple sees massive crowd during the festivals like Bhadrapad Shudh Chaturthi, and Magh Shudha Chaturthi. 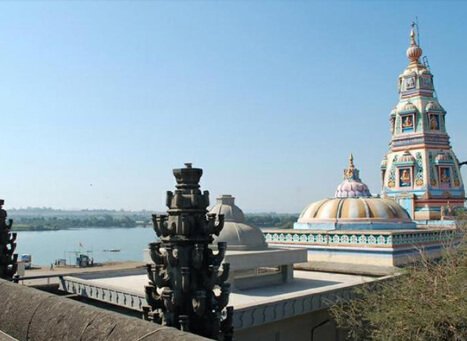 Holy occasions like Bhadrapad Shudh Chaturthi, and Magh Shudha Chaturthi are celebrated with pomp and show and brings together the people of different communities. Also, Bael Pola (Bullock Festival) is celebrated in a similar way.

The temple is located in Junner Taluka, which is approximately 85 kilometers away from the Pune district. So as to reach here, one can take either a jeep or auto-rickshaws.

Located on Pune-Nashik highway, approximately 190 kilometers from Mumbai, Vigneshwara Temple is surrounded by many famous tourist attractions. So, apart from the temple, tourists can visit following attractions: