Located in the Sudhagad taluka of Raigad district, Ballaleshwar Pali is one of the ‘ashtavinayakas,’ and remains thronged with the devotees of Lord Ganesh. Like other ashtavinayak temples, Ballaleshwar Pali too has a self-manifested idol of Lord Ganesh. The temple has two sanctums - the inner one with 15 feet height. While the outer sanctum is 12 feet high, which features a stone mouse. The inner sanctum features a 3 feet Ganesha statue, who resides on a throne carved out of stone with a silver backrest. Some of the traditional rituals observed here include ‘mahanaivedya’, ‘dahikala’ and ‘annsantarpan’ and a procession is carried out through the village during the festivals celebrated in the month of Bhadrapad and Magh.

Story Behind the Formation of Temple

Ballaleshwar Pali has a brief history that captivates the heart of pilgrims. Kalyansheth and his wife, residents of Konkan’s Pali region, gave birth to a son named Ballal, who was a firm believer of Ganesha. Ballal used to go to the jungle to worship a large stone that he believed was Ganesha himself. He would get so engrossed in what he was doing that he would simply forget to eat. His parents were quite worried about his acts and eventually decided to complain to Kalyansheth about his devotion. Furious by the acts of Named Ballal, Kalyansheth rushed to the forest and saw him worshipping the stone in a state of complete meditation.

Kalyansheth then threw the stone on Ballal, due to which all his friend ran away from the place, leaving behind him alone. Even after pelting stones, Ballal didn't move an inch. His father beat him with a stick and destroyed all his worship material. Even after this atrocious act, Ballal kept on meditating. Pleased with the utmost of Ballal, Ganesha came to the forest, untied his knots and healed the wounds. Thereupon, Ballal requested Ganesha to stay in the forest forever. And Ganesh even agreed to his wishes. That's how the Kalyansheth came into the picture. So the deity here is known as Balleshvar.

Spirituality is set deep even in the structure of the Ballaleshwar Pali temple. In the east facing temple, there are two sanctums; the outer one with a stone of mouse is 12 feet high, while the inner 15 feel high sanctum features the idol of Ballaleshvar. Ganesha resides on a throne carved out of stone with a silver backrest. Shrimant Morobadada Phadanavis was the main person behind the current architecture of the temple.

Although the Ballaleshwar Pali brims with tourists throughout the year but the best time to visit would be the Hindu months of Bhadrapad and Magh when a fair is organized at the temple. There is a strong belief among the devotees that Ganesha himself attends the ‘mahaprasad’ at midnight on Bhadrapad Chaturthi.

The temple remains crowded throughout the year, but the best time to visit will be the festivals hosted in the Hindu months of Bhadrapad and Magh. 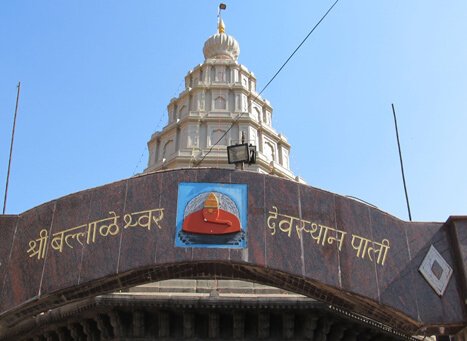 The temple is located in the village of Pali, 58 kilometers from Raigad district Ballaleshwar, right between fort Sarasgad and the river Amba. If traveling by public transport, get down at Vakan, further take a local transport to reach Pali. Nagothana, 13 kilometers from Pali, is the closest railway station.