27 kilometers towards the east of Kolhapur stands the ancient town called Kumbhoj, which is known for its Jain temples and a gigantic statue of Bahubali. In Kumbhoj, tourists will find the footprints of ‘muniraj’ or ascetics installed at the place along with Jain temples. Mostly Jain temples in regions are believed to be ancient but have been restructured time and again. According to the locals, many Digambar ‘munis’ have stayed in Kumbhoj, and that is the reason why the place is so auspicious.

Besides, tourists can see the model of Sammeed Shikharji with all the 'tonks.' Right below the model, there are eight more small designs that illustrate the various other Siddha Khetra's. From the hill, where the statue stands tall, tourists can see the aerial view of many nearby temples like Shwetambar Jahaj Mandir, Digambar Jain Temples, Samavshran Temple, Bahubali Temples, Sahastrakut Temple, Manastambha, Acharya Shantisagar and Acharya Samatbhadra Memorials. All the temples in the region are beautiful but it's the Shwetambar Jahaj Mandir that stands apart, due to its classic architecture.

Designed in the shape of a boat, Shwetambar Jahaj Mandir is a beautiful temple, located quite close to the Bahubali Atishayakshetra. Around the boat structure of the temple, there is a manicured garden with blooming flowers and crisscrossed by cemented pathway. Devotees of Shwetambar sects erected the temple in a typical medieval northern temple style and so named because of its ship-like base. It is a temple-cum-museum; also no entry fee is levied. Best time to visit the would be evenings as the temple lit up with colorful lights, and fountains.

Foreseeing the scenarios, Guru Gobind Singh asked to install the Guru Granth Sahib, thus the place came to be known as the ‘Takhat Sahib.’ Beautiful gold plated building of the Hazur Sahib was constructed under the guidance of Maharaja Ranjit Singh. It is said that it took five years to complete the structure of the Gurudwara. The gurudwara is also reverved as "Sachkhand Sri Hazur Abchal Nagar Sahib."

The town attracts millions of tourists from different corners of the world during the Mahamastakabhisheka festival, which is held once in 12 years. During the Mahamastakabhisheka ceremony, an important Jain temple, the statue of Bahubali is bathed in ghee, milk, saffron and other indigenous like sugar cane juice, saffron paste, sandalwood powders, turmeric, and vermilion. 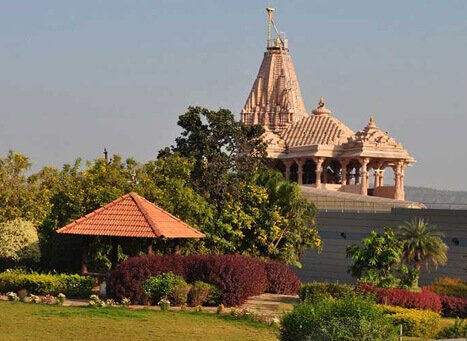 Kumbhoj, 27 kilometers to the south of Kolhapur city, can be approached by buses run by MSRTC i.e (S.T buses) or by private cars or taxis.

On a visit to the Jain temples at Kumbhoj, if having extra time at your disposal, make a point to visit the following nearby attractions:

Also, if tourists are visiting Nanded via airways then a stopover at the Aurangabad is a must. In Aurangabad, tourists can visit the places like Ajanta Caves, Ellora Caves, Grishneshwar Jyotirlinga Temple, Bibi Ka Maqbara, Bhadra Maruti, to name a few.