Chintamani Mandir of Theur is one of the largest ‘ashtavinayaka’ (8 Ganesh) temples of Maharashtra. Located on the Pune-Solapur national highway, Chintamani Mandir was built by Shri Dharanidhar Dev, son of Shri Moraya Gosavi. Later some alternations in the architecture were made like a big bell was added, which was gifted by Bajirao Peshwa.

The main hall of the temple, which features the beautiful sanctum with an east facing self-manifested idol of Ganesha ,is believed to be 100 years old. Like other ashtavinayaka idols, Chintamani temple's idol too features only head studded with jewel eyes and trunk. Also, the hall has a black stone water fountain. Apart from the main shrine, there are many other temples in the complex that are sacred to various other god and goddess like Mahadeva Mandir, Vishnu-Lakshmi Mandir, and Hanuman Mandir. Right behind the temple, there is Peshwa Wada, which was once the residence of Madhavrao.

Magnificence at its best

The story associated with the place is that once upon a time there was a king named Abhijit, who used to stay with his wife, Gunavati in a jungle. They were a childless couple, and always wanted a kid. After long penance, they got a boon from the jungle in the form of a child, whom they named- Gana. One day, Gana went to the ashram of Kapilmuni, where he saw a jewel named Chintamani. He forcefully took the jewelry from Kapilmuni. Then, Kapilmuni prayed to Lord Durga. And then he prayed to Vinayak to get the jewelry back. Vinayak then retrieved the jewel Chintamani from him and returned it to the Kapilmuni. But Kapilmuni was still unhappy and asked Vinayak to settle with him in the name of Chintamani under the kadamba tree. Presently, the habitat around the kadamba tree is known as kadambpur.

To witness the temple in its full swing, one should visit here during the celebrations like Ganesha Prakatostav, Maghotsav festival, and Rama-Madhav Punyostav. Another important festival celebrated Theur is on kartik vadya 8 (as per the Hindu calendar), which marks the death anniversary of Shrimant Madhavrav Peshwa and his wife Ramabai saheb.

Festival celebration during the Ganesha Prakatostav, Maghotsav festival, and Rama-Madhav Punyostav are the best time to visit the Chintamani Temple in Theur.

The temple is located in Theur, which is approximately 25 kilometers from Pune. So as to reach here, one can take a cab or bus from Pune. 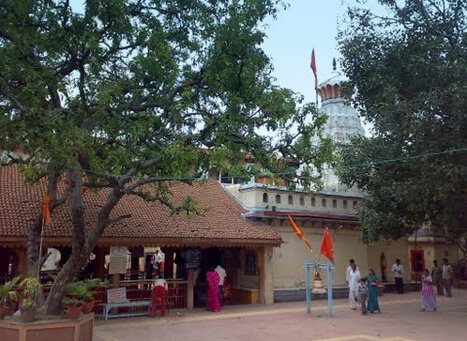 Chintamani Temple in located in Theur, which us hardly 25 kilometers from Pune. So after a brief visit to the temple, make a point to visit Pune, Lonavala, Khandala, and Panchgani. Mentioned below are some attractions in Theur: