The Vishalgad Fort is located 76 km North West of the region of Kolhapur, Maharashtra. It is some 60km north-west of the famous Panthala Fort. The place is yet again some 21 km south of the Kolhapur Ratnagiri road. The fort is based on the hills. These hills divide the region into two parts that are namely the Anaskura ghat and the Amba Ghat. The Vishalgad Fort is based on the Sahyadri ranges and the Konkan region. This is why this hill fort did have an immense strategic importance in the ancient times when this fort was considered to be a watch tower that did allow a proper vigilance on both the regions. This fort is one of the most famous forts that existed during the reign and the times of Shivaji, hence it is a place of immense tourist attraction. The place is considered to be one of the favourite mandatory spots that are included for tourism purposes. It speaks of the heritage and the ancient traditions of the times of the Marathas.

The fort originally was under Adilshah of Bijapur. Shivaji for long had his eyes set on the fort however could not conquer the fort due to its challenging terrain. In fact Shivaji also did attack the fort, however in vain. It was finally through a plan where a few of Marathas went up to the Adilshahi commander and convinced him that they wanted to join Adilshah against Shivaji as they were not happy in the rule of the latter. The plan paid off and the Marathas were granted entry within the fort. Once inside the fort the Marathas declared revolt and amidst the chaos that was created inside the fort, Shivaji attacked the fort from outside with his forces. This was a plan that did pay off. Shivaji and the Marathas were successful in capturing the fort.

The fort of Vishalgad is in a location that can be reached via the road and also by flight. The fort is connected to the city of Kolhapur that is the nearest railway station. One can also reach the fort through flight in which case Pune happens to be the nearest airport from the Vishalgad.

You do not need to pay any fees to enter this fort.

The fort is open on all days of the week and also the weekend. The day hours are the conducive time for visiting the place. This ensures that the tourists get a proper look at the fort and its heritage and also their own safety is ensured. 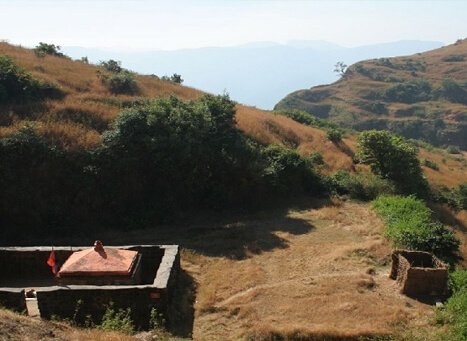 There are a number of places to visit in this fort. It is in fact the perfect destination for a weekend holiday in Maharashtra where people can come and rest and have a great time with friends and family. The fort has various sightseeing locations such as Sati’s Vrindavan, Amruteshwar temple, Takmak Tok, Sri Nrusinha Temple, the tomb or the dargah of Hazrat Malik Raihan. There are also samadhis that are built in the memory of Baji Prabhu Deshpande. In fact a Maharashtra tour shall be considered quite incomplete without visiting this fort and its beautiful locales.

The fort is best visited either during the summers or the winters, with the winters being the more conducive time for a visit to the place. The other common and popular tourist seasons has to be times of academic vacations and festivals of the locality.