The Arnala Fort is a super specimen of an island Fort. The fort is located on the port town of Arnala which is about 8km away from Vasai in Maharashtra India. This fort which is also known as Jaldurg is a great place for sightseeing and is a major tourist attraction in Maharashtra. The local people also refer to this popular spot of tourism as Janjire-Arnala. This fort was renovated and rebuilt by the Portuguese and they named it ‘llha das vacas’. The fort is one of the most important halts if one has moved out on Maharashtra tour. The fort contains some of the most amazing artefacts and architectural relics of the earlier times. People not only from all over the country comes to visit this fort, but even foreign students who are studying ancient architecture makes it mandatory that they do visit this fort to get a feel of the contemporary heritage. The Arnala Fort is one of the most suitable destinations for a weekend holiday.

The fort was built in the year 1516 by Sultan Mahmud Begda who was a local chieftain from Gujarat. The fort has a strategic placement where it has been constructed on the mouth of the Vaitarna River. The Portuguese gained control over the fort in the 1530s. The Portuguese gave this fort to a Portuguese noble who demolished the earlier construction of the fort and made it a new. The new construction was a plan of 700 by 700 foot. However the noble man could not really finish his task. The fort remained under the Portuguese control for nearly two centuries. It was their point of control to exert supervision over their navigation and shipping activities over the northern Konkan coast.

In the year 1737 on March attack from the Marathas forced the Portuguese to abandon the fort. The Marathas next claimed the fort and built three bastions – Bava, Bhavani and Bhairav. The British next captured the fort in the year 1781 on 18th January in the First Anglo Maratha War. The fort there after changed hands twice. However in the current sate the fort requires a lot of immediate measures of maintenance and repair.

The nearest railway station is at Virar which is about ten kilometres away from the fort. One can also reach the fort through the state transport busses and can also hire auto rickshaws. Once you reach the Arnala beach you can reach the fort with the help of a commuter boat. 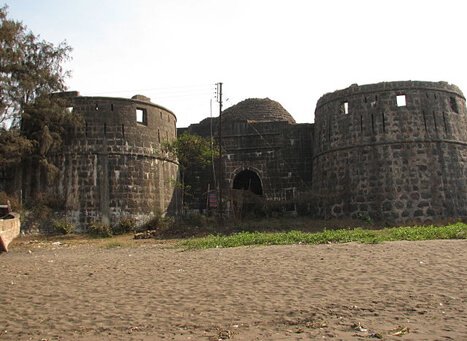 Some of the important places to visit in the Fort shall be various architectural specimens such as large octagonal fresh water reserves within the fort. The temples of Ambakeshwar, the template of Lord Shiva, Devi Bhavani and also the tombs of Hajjali and Shahali. The main entrance of the Fort also has a stately look that is made of solid stone and has been decorated with pictures of elephants and tigers. The tourists can also see the external ramparts. People visiting the fort can also see the lone watch tower that is based at a distance of about 550 meters from the original fort. No entrance gate has been provided to the tower.

This place is once again open on all days of the week. The visitors and the tourists should ideally visit the place in broad daylight, as this is the time they can get a full view of the place and it shall also be safe for them.