Pratapgad meaning Valour Fort is a huge fort situated in the Satara district of Maharashtra. It is one of the best places to visit for a day trip and will be liked people who are interested in adventure, history and nature.

This mountain fort was a built by Chatrapati Shivaji Maharaj on a spur to look over the road between the vilagesof Kinesvar and Par. The fort is 15 kilometers away from Poladpur and 23 kilometers away from the west of Mahabaleshwar which is also a popular hill station. It stands 1080 meters above the sea level. It is also known for the Battle of Pratapgarh which was fought between Shivaji and Afzal khan beneath the rampants of the fort.

The fort is divided into two parts- the lower fort and the upper fort. The upper fort which is a rough square shaped fort is built on the crest of the hill. There are a few permanent buildings that include a temple of god Mahadev. The fort is surrounded by sheer cliffs that drop up to 250m. this part is located in the northwest part of the fort.

The lower fort is located in the southeast is around 110m wide and 320m long. It is also surrounded and protected by bastions and towers which are almost 10 to 12m high. There is also a tower named Afzal tower named after Afzal Khan whose head is supposed to be buried underneath the tower. It is made to protect the approach towards the fort.

The task of building the fort was given to prime minister of Shivaji named Moropant Trimbak Pingle and was constructed for defending the river banks of Koyna and Nira rivers. The famous Battle of Pratpgarh was also fought here. After numerous invasions and destruction, in the year 1957, a 17 feet high statue of Shivaji made of equestrian bronze was unveiled. The same year a road was constructed by PWD for better communication and transportation. In the year 1960, a national park and a guest house was also built inside the fort. This fort is now owned by Uday Raje Bhosale who is the heir to the former princely State of Satara.

This fort is located 25 kilometers from Mahabaleshwar and one can avail for buses that go to this fort. With a road constructed by the government, reaching the fort is not difficult. 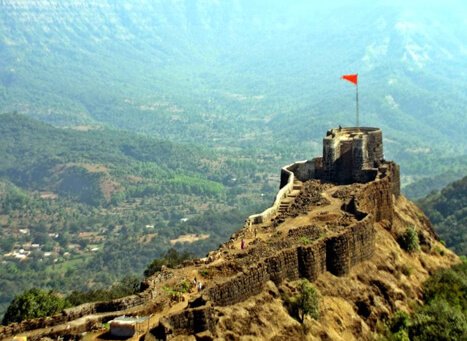 No entry fee is needed to enter the fort.

The place is perfect for sightseeing and the best choice for tourists who love to dwell amidst nature. It is a famous tourist attraction with the following things to see:

It is also perfcet for camping and trekking.

Where to Stay in Mahabaleshwar?