Panhala Fort, one of the recognised forts of Maharashtra is also known as Panhalgad, Panhalla or Panalla. The word literally means “the house of the serpents”. This fort is based in Panhala which is 20 km northwest in Maharashtra, India. The fort speaks of the ancient Indian heritage and also of the grand reign of Shivaji Maharaj here. The fort is strategically placed where it can help to keep a vigilance over the pass in Sahyadri mountain ranges. This pass happens to be one of the main trade routes from Bijapur to the coastal areas. Due to this strategic position of the fort, it has been witnessing many wars and struggles between the Mughals, the Marathas and also the East India Company over the decades. This is the famous fort where the illustrated Tarabai have spent her formative years. Large part of the interiors of the fort has been kept intact the way they were since the beginning of their times. The fort is a great tourist attraction and is one of the elemental places to visit if you are on a Maharashtra tour.

The Panhala fort was constructed between the ear of 1178 and 1209 CE. It is one of the 15 forts that include the forts of Vishalgad, Bavda, Satara and Bhudargad, all of which were constructed by Shilahara during the reign of Bhoja II. Copper plates reveal the fact that Panhala was under Bhoja II between the period of 1191 -1192 CE. The era 1209 -10 saw the defeat of Raja Bhoja by Singhana who was the most powerful monarch of Devagiri Yavadas. Soon the fort passed on to the Yavadas.

There after the fort passed on to various rulers. Finally in the year 1659 upon the death of Afzal Khan, the general of Bijapur, Shivaji Maharaj took over Panhala. In the year 1660 Adil Shah II sent his troops to Panhala to capture the fort and take it away from Shivaji Maharaj. A fierce battle followed. Finally all the resources of Shivaji was exhausted and he was on the verge of being captured by the enemy forces. Hence Shivaji had to flee. However in the year 1673 Shivaji Maharaj occupied the fort permanently.

The fort of Panhala can be accessed from different cities of Maharashtra. The fort is at a distance of 200 km away from Pune and is 450 km away from Nasik. One can avail bus from Kolhapur as well to reach Panhala Fort. In case somebody wants to avail flight then the nearest airport is at Kolhapur (25 km away from the fort). Mumbai Chatrapati Shivaji International Airport is also 420 km away. The nearest railway station is again at Kolhapur which is 27km away.

The fort is open on all the weekdays. The visitors are encouraged to visit the fort during the daytime. This shall ensure that they get a proper look of the place and also can move about the place in safety. It is one of the ideal places of tourism if you are on a weekend family holiday. 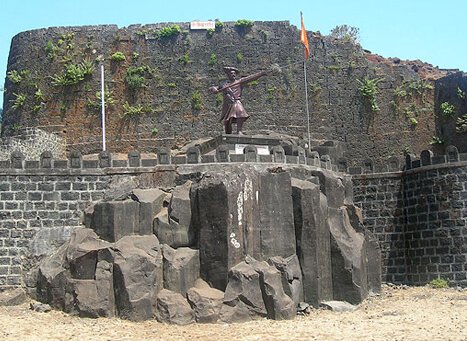 There are a number of places to visit within the fort. Some of the popular spots for sightseeing are the internal features of Fortification and bastions, the hidden well or the Andhar Bavadi, the Kalavanticha Mahal which was the residence of the ladies during the early times, Ambarkhana or the central granary, Dharma Kothi that is the additional granary along with Ambarkhana, Sajja Kothi. One can also visit the Teen Darwaza, Wagh Darwaza and the Rajdindi bastion that is a hidden exit from the fort in times of emergency and also the templates that are built in dedication of Mahakali.

There are no entry fees for getting into this fort.