The west central attraction of India, Maharashtra, is home to astounding wonders, many of which are regarded as national and international heritage sites. One among these is the 15th century fort of Murud Janjira. A castle resting near the coastal island Murud, this structure attracts millions of visitors till the present hour and resonates the rich history of ancient Maharashtra that was once a hub of culture, technology and royalty. The fort’s architecture displays a blend of cultures followed by different religions and communities. Historically, it was an army base of royal families which ruled the region over several generations. It has witnessed mass bloodshed and wars between different kingdoms that fought over its kingship. Its mega structure indicates that the island castle was built to promote the defence strategies of the host kingdom and its people. It has been open to general public since 1940 and is maintained by the funds sponsored by state and central government programs. Today it is visible as the ruins of mighty dynasties that co-existed with its native population. Many of its housing areas have been severely damaged due to wartime attacks and natural calamities, and require immediate attention. In the meantime, visitors to the state of the Maratha Warriors can plan a trip to the Murud Janjira fort that is sure to incite your taste for history and adventure.

Chapters from the pages of history suggest that the Murud Janjira Fort was built by fisherman turned King Rajaram Patil who constructed it to protect the island and its people from petty thieves and potential political enemies. It dates back to the early 15th century and has since been ruled by different kingdoms, such the Siddis, Mughal, Deccan rulers, Marathas and colonised by Portuguese.

The island sits on the Raigad district and is 165 kms away from the Chatrapati Shivaji International Airport that is a five hour drive from the bustling roads of Mumbai. Also, Panvel is the nearest Railway station to Murud. Autos are the most commonly seen transportation vehicles there.

Murud Janjira has lots of offer to all its visitors. The laid back ones can enjoy a solitude gifting ambience; the adventure seekers can enjoy boat rides to nearby Kasa Fort, or take a circumference ride of the ancient Janjira fort to end the day with a beautiful sunset on its highest point. There are Horse rides provided to visitors who wish to go on a local sightseeing spree.

For those driving to Murud, the car parking fee is charged Rs 30. Adults need to pay Rs.20 and Rs. 10 for children for participating in boat rides which offer rides to nearby forts and islands. 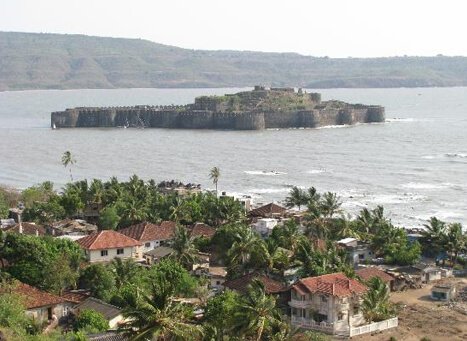 Being a frequently visited weekend tourist attraction in Maharashtra, Murud Janjira opens to visitors every morning at 7am and shuts down after sunset. With exception of maintenance days, it is open all seven days of a week.

Amongst a number of tourism places to visit during a Maharashtra tour, you can surely spend a day within the walls of the Murud Janjira, which is in itself an island that has been home to 19 artillery bastions and canon weighing 22 tonnes for more than 500 years. Standing on the highest point of this castle, you get to enjoy the orchestra of blowing winds and relieve in your imaginations, the days of grandeur that the fort enjoyed for several centuries. So, plan your weekend holidays during winter and give a visit to this magnificent site.