Once known as the as the second-most impregnable fort (the first one being the Gwalior Fort), Ahmednagar Fort was the main headquarters of Ahmednagar Sultanate. Malik Ahmad Nizam Shah I, the first sultan of the Nizam Shahi dynasty, ordered to built this fort so to protect his city against the invaders. Unique features of the fort like 18m high walls supported by 22 bastions; one large gate; three small sally ports; glacis; no covered way and a ditch revetted with stone set it to look apart from other forts of India. History has it that Chand Bibi, a regent of the Shahi dynasty, successfully defended the fort from the Mughals many times. But Mughals were somehow able to conquer it. Adding to its historical significance is the fact that Aurangzeb died here in 1707. After Aurangzeb's death, the fort passed to the Nizams in 1724, Marathas in 1759 and later the Scindias in 1790. In 1803, Ahmednagar fort was taken over by British during the Second Anglo-Maratha War. During the days of Quit India movement, Britons made a prison in the fort. Various diplomats of Indian National Congress like Jawaharlal Nehru, Abul Kalam Azad, Sardar Patel, etc have been detained in this fort. Currently, the fort is the administration of the Armoured Corps of the Indian Army. 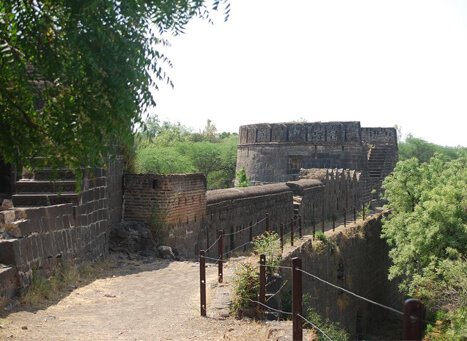