The Vasai Fort or the Fort Bassein is situated in the village of Vasai in the county of Vasai Taluka of Palghar district in the state of Maharashtra. The fort derives its name from the Portugese word, ”Bacaim.”This word has association with Vasa Konkani tribes of the region of North Konkan, extending from South Gujarat to Mumbai."Fortaleza de São Sebastião de Baçaim" or Fort of St. Sebastian of the Vasai is the actual Portugese name of the fort. The fort derives its name Vasai from a Marathi word. The popular song, “hymn for the weekend” is shot in the famous British Band Cold play and this video has become very popular all over world. It is also a favourite of the Bollywood film makers and the movies of Aaag and Khamoshi were shot here. The Vasai fort is a spot with noted historical importance and is considered to be a heritage site by the official tourism department. This architectural marvel is now safeguarded by the Archaeological Survey of India. It is a popular tourist attraction of Maharashtra tourism.The village and the fort of Vasai can easily be approached via the Vasai Road Railway Station.

The historian Joseph Gerson Da Cunha has stated the area of Bassein was ruled by Chanakya dynasty of the state of Karnataka and was ruled by Silhara dynasty of the Konkan and then the Yadavas of Devgiri and was finally captured by the Muslim rulers of the state of Gujrat. From the time of 16th century, Bassein was Portuguese northern capital with the treaty with the Sultan, until Marathas under the rule of Chimaji Appa captured the fort in the year 1739. This Bassein fort also played a vital role in first Anglo-Maratha War.

Bassein fort is situated near to the Bassein Beach in Mumbai and hence can be approached by air, rail and road. The fort can be reached by taxis and the MTDC buses that travel from the various parts of Mumbai to the place Vasi and takes only about half an hour. Vasi can also be approached through Ghodbunder Road from the place Thane. Vasai is the closese railway station and can be reached from the Churchgate, Dadar and Andheri by boarding Dahanu or Virar local trains. From the station rickshaws or buses can be availed to reach the fort. The Chhatrapati Shivaji International airport is the nearest one and tourists can travel by air to reach Mumbai from any part of India. 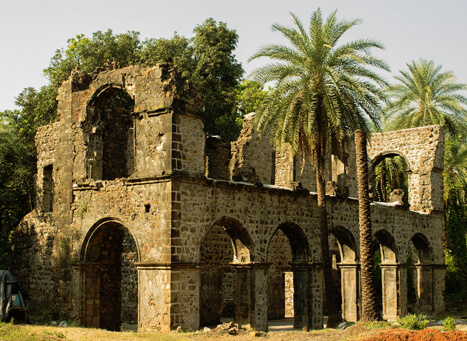 There are a host of attractions near the Vasai Fort. Some of the best places for sightseeing here are the Sanjay Gandhi National Park, Global Vipassana Pagoda, Rangao Beach, Jivdani Temple, Tungareshwar Temple, Gorai Beach, Chinchoti water falls, Vailankanni Church etc. There are some interesting places to visit around the Ahmednagar Fort, like the water kingdom, essel world, Vardhman fantasy garden and so on.

The fort can be visited anytime of the year but the best time to visit it is from October to March.