Alang Fort or Alangad is a fort in Nashik, Maharashtra, India. It is one of the most difficult forts to reach in Nashik. The other two forts are Madangad and Kulang. It is among the tourist places that people visit for hoilidays.

Alang Fort is located in the Nashik district in Maharshtra, India. This fort is properly situated in the Kalsubai range of Western Ghats and is a magnificent and majestic fort in the hill top. This fort is basically neglected because of the heavy rains in the area and a confusing and difficult path to the fort. It is an ancient fort that was built on the Western Ghats. However the builder and the architect of the fort are not known to the historians. Also, in the history of Maharashtra, very less has been mentioned about this fort.

As per the stone carvings done in the fort, it is supposed to be built by the local tribes who resided in the nearby Ambewadi villages. It has made using marvel stone but after years of destruction and low on maintenance, this fort doesn’t look like a fort. It is situated at a height of 1372 meters above sea level which makes it a popular tourist attraction. The fort is built with the same rock that is found on these hilly ranges. The main wall of the fort is built on the ridges and looks like it is a part of the mountain rocks. It also has a raised rampart of 30 meters thickness built in a curved shape alongside the hill top.

The steep slopes on one side of the fort and a vertical slop of around 100 meters makes it difficult to climb. However it is connected with a number of hillocks that surrounds two more forts giving it a unique view. This kind of arrangement shows that the fort was built for the civilians to hide during wars. Reaching this fort is quite difficult as the easiest ways out of which one was a tunnel, were only known to the local peoples who resided in those times and are not found now.

The area is covered with thick, green vegetation as it receives the highest and the heaviest rainfall in the Western Ghats. Many caves can be found inside the fort for living. Many inscriptions are also found in Sanskrit and Palli language. The fort stands on pillars that were built using singe stones. The other places to visit are the two forts that are located nearby this fort. They are Kulang and Madangad fort. The three are closely related and Alnag fort is one among this trio.

It is said to be used by the local tribes but according to the British records, this fort was occupied by the Mughals and the Marathas as it worked as a nice watch tower during the medieval period. Its height gave them the advantage to keep a check on invaders. The height and the poor accessibility made this fort a lesser conflicted fort, according to the hilltop fort history of India. Marathas used it as a place to reside in times of crisis where as the British used it for adventure sports during holidays. it is now under the Maharashtra tourism department and is maintained by it.

However reaching the fort is very difficult but it takes 7-8 hours from Ambewadi to reach this fort. One can reach Ambewadi by bus and then can opt for various ways available to reach the fort. 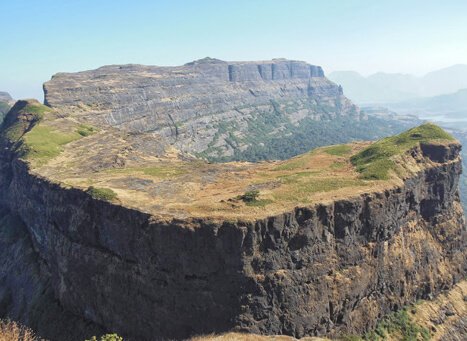 One can roam around the fort to check out each and everything present in the fort, all of them quite interesting! This place is suitable for trekking and hill climbing because of the steep slopes. It is also suitable for photography as the area is covered with dense vegetation and plantation. Apart from all these, people can have a look on the age old architecture, inscriptions and many more. This heritage site will offer them a nice time and view for sightseeing. It is also one of the best places of Maharashtra tourism which people can visit at times.

There is no entry fee to visit the fort.

The fort is opened everyday of the week and throughout the day but it is advisable to visit the fort during the daylight in order to avoid any accident as the path is very confusing and difficult.

The best time to visit the fort is after the monsoon season from October to January as during monsoon climbing the hill top becomes very difficult due to slippery roads.