The Pitalkhora Caves comprise of rock-cut 14 cave monuments situated on the Western Ghats of Maharashtra in Satamala Range. They are located in Kannad, Maharashtra in Aurangabad. These caves are cut out of various types of basalt rock and some of the caves have deteriorated. Out of the 14 rock-cut caves four of them are chaityas and the rest are viharas. The caves are divided into two groups. One group comprises of ten caves and the second group of four caves. The complex flaunts statues of soldiers, elephants, a deteriorated Gaja Lakshmi icon and a very old harvesting system of rain water. The site of the caves is at a distance of 40 km from the Ellora Temple. The caves can be reached by a flight of concrete steps, past a beautiful cascade of waterfall located beside the caves. The complex even houses unusual sculptures, such as the Yaksa figures. The complex comprises of a chaitya hall, cluster of viharas, small caves in the gorge consisting of stupas.

These Pitalkhora Caves are mentioned in Buddhist chronicles, such as Pitangalya of the Mahamayuri and the Ptolemy’s Petrigala. The inscriptions on these caves date from the 250 century B.C. to the 3rd-4th centuries. The historical importance of these caves are that they have been traced back to the Hinayana period of Buddhism and some of the preserved paintings of these caves belong to the Mahayana Period.

By road travellers can reach Aurangabad, where these caves are situated by availing state buses that operate from Pune, Shirdi, Mumbai, Ahmednagar, Ahmedabad, Dhule, Jalgaon, Hyderabad, Nasik to Aurangabad. Jalgaon is the nearest railway station at a distance of 59km. from Ellora. Devgiri Express and Tapovan Express travel daily between the cities Mumbai and Aurangabad. Chikalthana is the nearest airport at a distance of 30km. from Ellora and 12 km. from Aurangabad.

The caves are open all days between 9a.m. to 5p.m. 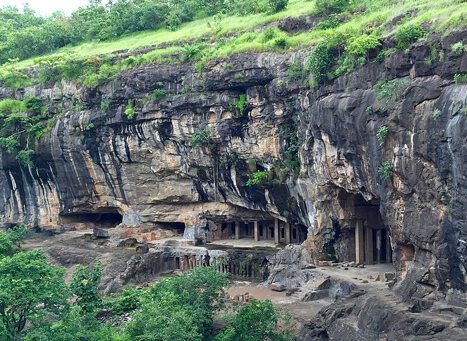 There are a host of attractions around Pitalkhora, such as Ajanta Caves, Ellora caves, Bani Begum Bagh, Grishneshwar Temple, Khuldabad, Bibi ka Maqbara, Daulatabad Fort, Panchakki and so on. Ajanta caves are the most popular caves in Maharshtra and the Ellora caves contain out of 34 rock-cut cave temples. Bani Begum bagh is a beautiful garden built by Aurangazeb in the memory of his wife, Bani Begum.

The best time to visit the caves is in the months between October to March.