Lenyadri Caves represents about 30 Buddhist rock-cut caves, which are situated in the district of Pune in the state of Maharashtra at Junnar. 26 of the total of 30 caves are serially numbered from the east to the west. The caves numbered 6-14 are the chapels, which are known as chaitya-grihas and the rest of the caves are the dwelling places for the monks and are known as viharas. These viharas are crafted in the form of cells. There are a couple of water cisterns carved out of rock and two have inscriptions.

The word Lenyadri has been derived from “Lena”, which means cave in Marathi and “Adri” which means stone-resistant in Sanskrit.The layout of the caves are similar and generally comprise of 1-2 sides and have long benches, two in number for the use of the occupants.

The Cave 7 houses the popular Hindu Temple dedicated to Ganesha God. It is one of the shrines in the set of eight noteworthy religious places known as Ashtavinayak in the western part of Maharashtra. The caves are associated to the Hinayana sect of the Buddhist religion as well.

These caves trace back to the period of 1st-3rd centuries A.D. Ganesha shrine located in Cave 7 dates back to the first century A.D. The date in which this Buddhist shrine was converted to a Hindu Temple is unknown. The Buddhists created these caves for the purpose of living and praying. The viharas served the residential purpose of the monks and chaitya griha served the purpose of praying.

Girijatmaj Temple is located above one of the caves and tourists need to climb 200 steps reach the temple. Monsoons are not at all suitable time to visit this temple, for senior citizens Doli is available (they charge around 700/-₹). Be aware of the monkeys here; you can get many shops for tea and snacks. The idol is Ganpati bapa Morya.

These caves can be reached by air, rail and road. Pune is the nearest airport to reach Junnar. 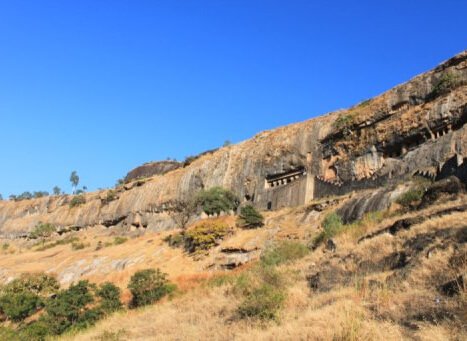 Pune is well connected to all the major cities in India. From the Pune airport, tourists can hire a bus to reach the Lenyadri caves. The nearest railway station to Junnar is at Pune at a distance of 74 km. To reach the caves from the Pune Railway Station, tourists can avail the local buses. By road the caves can be reached from Pune by bus. The tourists can board the bus from the Shivaajinagar bus stand in Pune, Kalyan ST stand from Thane and the Mumbai central bus stand from Mumbai.

The best time to visit these caves is between November and February to escape the scorching heat of summer. Tourists can visit between August-October to experience the beauty of the caves washed with rain.