Barot Caves are the Zoroastrian or Parsi Cave Temples. These caves are comprised of water cisterns, seven in a row to form the face of the cliff. These cisterns are water tanks rectangular in shape and only one of them hold water till beginning of February or end of January and filled up during the Monsoon season. The largest of the tanks remain filled up for entire year, which protects their sacred icon known as the e Iran Shah Fire. These caves are of religious and historical importance to the Parsis. The Parsi ancestors took refuge in these caves from the Muslim invaders for a period of 13 years. It is believed during this time they took the fire, “Iran Shah Flame” with them inside the caves which is believed to burn till present date. These caves reflect the harsh conditions survived by the brave Parsis in Bahrot to keep their faith in Ahura-Mazda alive.

The presence of pottery, coins and glassware in these caves that dates back to Sassanian Period in Iran throws light on the fact that trading relations existed between the Gujrat coast and the Iranian Zoroastrians. A familiar post of the Parsis with whom they traded was Sajan. This was the reason for them to take shelter in these caves to escape the Muslim attack.

These Parsi cave Temples reflect the story of how the Zoroastrian ancestors safeguarded their faith against odds and inside the main temple, the fire can be seen burning. This holy fire is considered to be a superior grade of sacred fire. These cave temples is an architectural marvel located at Dahanu, 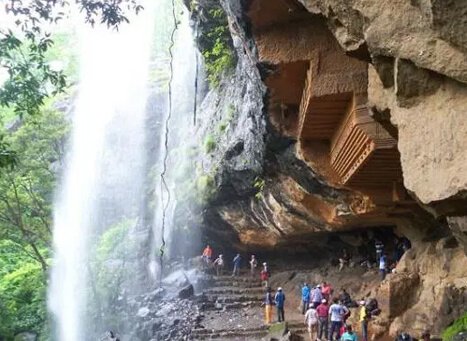 25 kms from Sajan, Gujrat, and 8kms from Bordi town.

It is open everyday for the visitors and the preferred time of visit is between 9a.m.-5p.m.

The entry ticket fee is Rs.10 (per person)

It is humid and scorching in summer and wet during the Monsoon season. Thus the best time to visit the caves is during the months August to February.