These Karla Caves, popularly known as Karla Cells are a conglomeration of enticing rock-cut caves of Buddhist origin situated at Karli close to Lonavala in the state of Maharashtra. These shrines were constructed in the period between 2nd-5th centuries. One of the oldest cave shrines belongs to the 160BC period. Budhhists were associated to traders, manufacturing and commerce had their monasteries near to the trading routes to offer shelter to the travelling traders.

These caves exhibit a prayer hall that dates back to the 1st century and are about 45meters long and 14 meters high. The halls display sculptures of elephants, lions and female and male characters. The Karla complex carved out of rocky hill housed the viharas or the residential places of the monks. These caves display intricately carved vaulted interiors and arched entrances. It exhibits a central motif, which is a large horseshoe arch, an Ashokan pillar with the stone façade and a torana located in between.

These Karla Caves has historical importance and are related to the sect of Mahasmghika of the Buddhist religion and Hinduism later. These caves follow a mixed Buddhist and Indian style of rock-cut architecture. These shrines were developed in two periods. The first period is 2nd century B.C. to the 2nd century A.D. The second period is between 5th A.D to the 10th A.D.

These caves are open everyday and the preferable time of visiting the caves is from 9a.m. to 5:30 p.m. 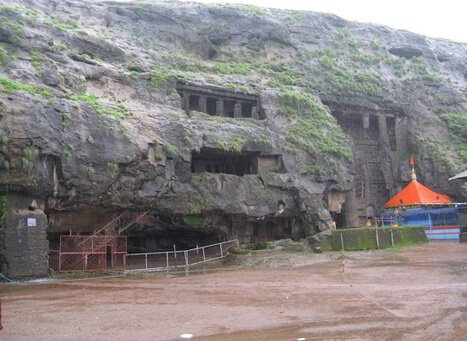 Karla Caves is an exemplary architecture of the Buddhist rock-cut caves. The Chaityagriha of the Karla Caves is the best piece of architecture of all monument types in India. It is believed that these caves are carved from living rocks. Tourists can climb up these Karla caves and it takes about 20 minutes. Pavana Lake , Bhaja Caves, Lohagad Fort, Lion’s Pont, Narayani Dham Temple, Shri Durga Paraneshwari temple, Rajmachi Fort, Lonavala lake and Tiger’s Leap are the noteworthy attractions near the Karla Caves.

The entry fee ticket is R.5 (per person).

The best time of the year to visit the spectacular Karla caves is between June-January.