The Elephanta Caves are a cluster of caves situated at Gharapuri on the Elephanta Island in the Mumbai Harbour. This island situated on a projection of Arabian Sea comprises of two cave groups, the first group includes five Hindu caves and the second one two Buddhist caves. The Hindu caves comprise of the stone rock-cut sculptures devoted to the Hindu God, Lord Shiva and represents the Hindu sect Shaiva. The caves are carved out of basalt solid rock. The rock –cut cave architecture dates back to the period of 5th-8th century. The Cave 1 or the Great or Main cave was the haven of worship of Hindu deities. After the Portuguese began to rule, the caves were damaged to a considerable extent. These caves were repaired and are preserved now as UNESCO World Heritage Site from the year 1987 and now it is looked after by the ASI or Archaeological Survey of India.

The Elephanta Caves is situated in an island away from the Mumbai coast and can be reached by ferry from the Gateway of India in Mumbai. The city of Mumbai is well connected to various other cities all over the world. Hence, tourists interested in visiting the caves have to first fly or take a train to Mumbai. The city also has a good railway network and in a local train tourists can reach the CST or Chhatrapati Shivaji Railway Station or Church Gate. From here travellers have to reach the Gateway of India, which is a 20-30 minute walk or 10 minute ride in a taxi. From the Church Gate travellers can even avail bus or taxi service to reach the Gateway of India. Finally the caves can be reached in a ferry ride of 60 minutes from the Gate way of India. Ferry boats are available every 30 minutes. The cost of a round trip ferry ticket for a person is Rs.120. The cave temple is located about a km. away from the jetty.

The caves are open on all days between 9a.m. to 5p.m. except Mondays. The entry fees are Rs.10 for the Indians and Rs.250 for the foreigners. 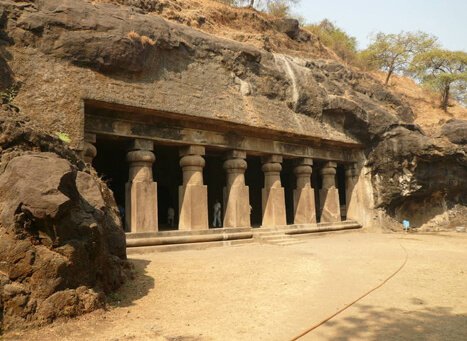 The caves on the Elephanta Island are worth visiting. The main cave houses the Shiva Lingam and has two doors. These shrines are protected by keepers. Worship of the Shiva Lingam is done everyday by the devotees. Many of the caves show signs of damahe which usually occurs during the rainy season.

There is a small toy train that takes travellers from the jetty to the base of the hill and charges R.5 one way. Travellers can even choose to walk along the pier to reach the entrance to Gharapuri village and the entrance fee to the village is Rs.5.

October to February is the best months for visiting these caves.

Best Hotels to Stay in Mumbai