The Kharosa Caves are situated in the Kharosa village, which is at a distance of 45 km from the Latur City in the Latur district in the state of Maharashtra. There are a total of 12 caves, among which one flaunts the image of a seated Jain Tirthankara. These caves depict a dozen of carved panels that exhibit mythological stories. The first of the caves exhibits a beautifully painted statue of the Lord Buddha in sitting position. The various other caves there have shivling and one of the caves has a meticulously crafted sculpture of the Lord Dutta. The eminent sculpture of Yaksha outside the caves is very popular among the travellers.

The upper hall, containing idols of Shiv-Parvati and Vishnu idols, these caves can be entered by a flight of narrow stairs. The second cave houses shivling while the 4th and 5th caves have two floors and the ground floor.

The Kharosa caves were built in the 6th century during the Gupta period and are popular for the eminent sculpturesRavana, Narasimha, Shiv-Parvati and Kartikeya. The caves have historical importance. The presence of Sita Nhani or Sita’s bathroom indicates that Rama, Laksman and Sita stayed here during their exile period.

It is open everyday for the visitors and the preferred time of visit is between 8a.m.-1p.m.

The entry fee ticket is R.5 (per person). 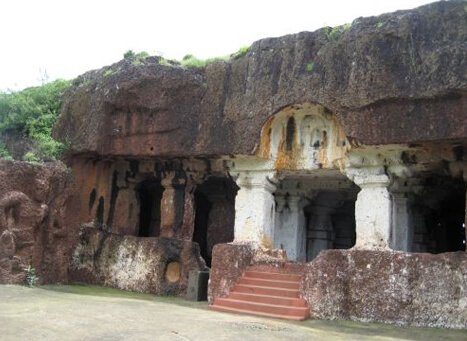 Ramegaon, Shivani and the Kharosa are the picturesque nearby villages to these Kharosa caves. There is a splendid Mosque and Renuka Devi Temple situated in the complex of the Kharosa Temples and this reflects the peaceful existence of the two religions side by side. Perched on the top of the hill is the Sita Nhani or bathroom of Sita, as is popularly believed that Lakshmana, Rama and Sita once lived here during their exile period. Grand sculptures of Shiva Parvati, Ravana, Narasimha and Kartikeya are popular tourist attractions.

Rainy season is the best time of the year to visit the marvellous caves as during this time tourists can see lush greenery all around.