In a country of rich culture and heritage, we find some of the most admired works of art from the historical eras. One of such remarkable works of art is the Pandavleni caves located near Nasik in Maharashtra. Seen as one of the most visited Buddhist religious centers, the Pandavleni Caves consists of 24 carved cave temples called viharas. One among those 24 carved cave temples is the Chaitya. In ancient times these viharas were used as monasteries where people met monks and discussed, whereas the vihara was used as a prayer hall for the Buddhist monks and disciples of Gautam Buddha. At the bottom of the Pandav Leni Caves one can see the Dadasaheb Phalke Smarak, with musical fountains, fast food outlets and museums.

A place given as a gift and donation by the kings who patronized the Buddhist culture and their scholars, this beautiful cave has become a tourist attraction in the recent years. The architecture and the art of the place along with the inscriptions found in the caves are some of the reasons that attract people towards this place. Located in the high altitude mountains of Trirashmi, the temples can be reached by climbing the stone ladders and trekking up the mountains. Its one of the places that has its name in the Maharashtra trekking list.

The caves were built in the early periods of the 3rd century and were ruled by the Western Kshatrapas, the Satavahanas and the Abhiras. The caves have witnessed contribution by the Mahayana and the Hinayana sects of Buddhism which can be identified in the sculptures and paintings of the area.

When a person is travelling by air, they must land at the Gandhinagar Airport in Nasik after which they can avail an auto or taxi to take them directly to the Pandavleni caves. On the other hand, when a person is travelling by train it is convenient for them to get down at the Nasik Road railway station and avail an auto or rickshaw or a taxi. While travelling by buses or other road transport one can reach Nasik and then make their way to Pandavleni caves on state transport.

While one is visiting the Buddhist cave temples, they can also make their way and explore the Sula vineyards near the Pandavleni Caves, Anjeri hills, Kalaram temple, Jain Mandir in Nashik, York Winery and tasting room, Kapileswara Temple and the Deolali Camp in Nasik. They can also visit the Ashoka falls in Igatpura for a calm and relaxing time that rejuvenates their souls with the purity of the place. 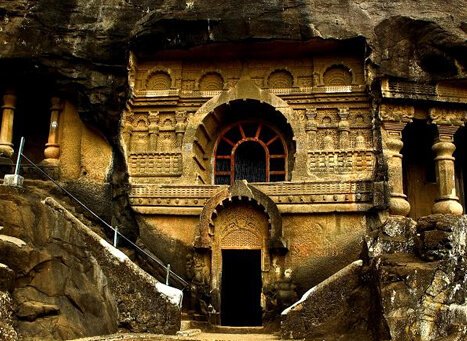 The Pandavleni caves have free entry for children under the age of 15 and also have free entrance for everyone on Fridays. Other than the exceptions mentioned above, the caves have a general entry fee for the visitors.

The best time to visit the Pandavleni caves is during the period of October to March because of the climate that remains favourable and safe for the visitors and travellers and provides them safety during the trekking events in the mountain which becomes a tiresome and troublesome task in the summer and monsoon. The morning’s hours are said to be the best time to see and admire the architectural beauty of the caves.