The Bhaja Caves are a medley of rock-cut 22 caves located near Lonavala in Pune, Maharashtra. These caves are located about 400 ft. above the Bhaja Village. It is located on the vital trading route from Arabian Sea to Deccan. These caves have stupas, which is one of their vital features. The caves comprise of the chaityagrihas and the viharas. The chaityagriha boasts of amazing horseshoe ceiling and splendid wooden architecture. It even has some commendable images of Buddha. The viharas of these caves have pillared verandas, which are decorated with exclusive relief. These caves are popular for their awe-inspiring wooden architecture. There are fascinating carvings on these caves. One such carvings show the Indian percussion instrument of tabla played by one woman and another woman performing dance.

The architectural design of these caves is similar to that of the Karla Caves. The sculptures of these caves exhibit elaborate garlands, headdress and jewellery. These sculptures were vibrant, colourful ones originally but later on were plastered.

The Bhaja Caves dates back to about 2200 years ago and they are vital rock-cut architecture of the Buddhist religion in the Deccan region. An inscription of cistern on these caves shows the name of the donor named Maharathi Kosikiputa Vihnudata, who belonged to the 2nd century A.D. Another wooden beam shows two more inscriptions that dates back to the 2nd century B.C.

The Bhaja caves are at a distance of 10 km. from the Karla Caves and the distance can be covered on foot or by auto. Local buses run from Lonavala to the Karla caves. Malavli is the nearest railway station to these caves. Travellers can board a train from Mumbai to Lonavala and then take a local train from Lonavala to Malavli. Tourists can even travel from Pune to Malavli by train and Pune is well connected to the major cities in India. Pune is the nearest airport to these caves. From the Pune airport buses can be availed to reach the caves.

The best time to visit the caves is in the months between October to March. 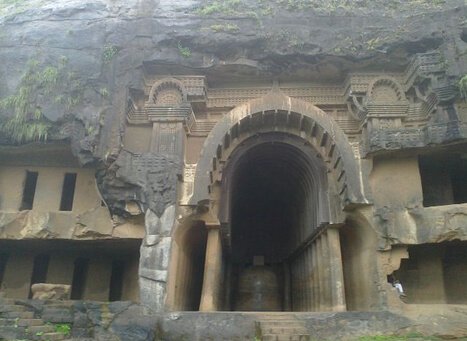 The caves are open all days between 8a.m. to 6p.m.