The Mahakali Caves are a medley of rock-cut 19 monuments constructed between the 1st-6th century B.C. 15 caves are located in the southeast and 4 caves to the northwest. Most of the caves are viharas but cave 9 is a chaitya and displays Buddhist mythology figures. The caves are constructed out of basalt solid rock. There is a bar located near the caves, known as Shashikant which is a swanky bar with Beetle Bailey wall art.

These caves are also known as Kondivita caves and located in Andheri East, Mumbai. They were named so by James Campbell for being near the Kondivite village. These caves are located at the junction between SEEPZ and Jogeshwari - Vikhroli Link Road. The Mahakali Caves Road connects these monuments to the Andheri Kurla Road. These caves are perched on a hill that overlooks the SEEPZ area and the Jogeshwari-Vikhroli Link Road. The bus service operated by BEST connects the Andheri trai station at Mumbai to the caves.

The northwest group of 4 caves belong to the 4th-5th century and the southeast group of caves are older. In the ancient times Kanherti was considered to be a popular Buddhist centre. The proximity of Kanheri to Mahakali suggests that there could have been another Buddhist congregation associated with the larger one at Kanheri. This area is considered to be suitable for chaityas and Buddhist monasteries. 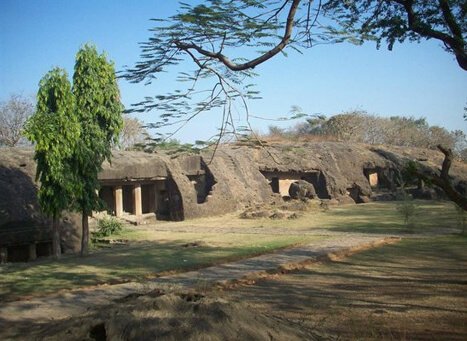 The entry fee per person is Rs.20.

Apart from the Buddhist figures and stupas housed in the Mahakali caves, there are many places of interest around and in the caves like the Albert museum that exhibits photographs, maps and archaeological items. The Marine Drive is another very popular attraction near the caves. This plush stretch of land along the coast connects the Nariman Point to Malabar Hill and Babulnath.

October to February is the best months for visiting these caves.