Mostly experts, even the geography book, says that the forests are the natural patterns of the biodiversity. They can be found in the tiniest and lamest part of the world; even in the desert. But one should not be thankful for the nature for all the beautiful forest. In fact, man, so as to restitute the integrity to our Mother Earth and all its beings, has created some of the finest forest and the best and soberest example amongst them is Sagareshwar Wildlife Sanctuary in Maharashtra. Artificial in its real sense, the making of this spectacular man-made forest has been possible only due to the efforts of the famous freedom fighter and environment activist, D. M. Mohite; who worked day and night to raise it in all its glory. In the year 1975, the park was formed and year after year, there has been an increase in the number of plants that has only added additional tourist value.

Located in Devrashtre village, the sanctuary is the home ground of Sambhar, Blackbucks, Wild Boar, Barking Deer, Chital, Fox, Hyena, and Porcupine. Also in this 10.87 sq km area, one can find many plants that have been plowed by the forest department like Tamarind, Neem, Nilgiri, Acacia, Agave, and Khair. The wildlife sanctuary is a treat for Entomologist too as here a good population of insects, birds and reptiles are present.

Flora Spotted in the Sagareshwar Sanctuary

In Sagareshwar Sanctuary, one can find dry mixed deciduous and Southern thorn forest in good number. Since its a manmade forest, here one can find many plant species plowed by the Maharashtra forest department like Tamarind, Neem, Nilgiri, Acacia, Agave and Khair.

Flora Spotted in the Sagareshwar Sanctuary 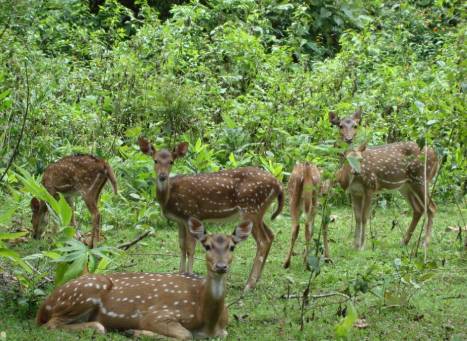 August to January & January to February

Specially after the monsoon, the region is a sight to behold due to its lush greenery

By Roadways: Tourists can easily reach Sagareshwar Wildlife Sanctuary by state transport buses. If traveling by private transport, all that tourists need to do is take National Highway No 4 (Mumbai-Bengaluru Highway)and then turn in at Sangli. See below for distance chart:

By Railways: Sangli Railway Station, 2 kilometers from Sagareshwar Wildlife Sanctuary, is the closest railway station. Local passenger trains and a few express trains do stop at Kirloskarvadi and Takari; thereupon tourists can take a rickshaw or can walk.

By Airways: Kolhapur Airport, approximately 36 km from Sagareshwar Wildlife Sanctuary, is the nearest airport. Since Kolhapur airport doesn't have daily flight connectivity from all the major metropolitan cities, tourists can take a flight from Pune, which is 232 km from Sangli.