Blackbucks, also known as Indian antelope, is famous all over India for of its unique jump and being the sole extant member of the genus Antilope. In India, only four picturesque wildlife sanctuaries were made to preserve the number of blackbucks and the most beautiful amongst them with the highest chances of spotting them (blackbuck) is Rehekuri Blackbuck Sanctuary. In Maharashtra, blackbucks are seen only in Rehekuri Wildlife Sanctuary. Initially, when the wildlife sanctuary was formed, the population of blackbuck was hardly 15. And to one's astonishment, the current no of blackbucks are 400. Blackbucks in Maharashtra are referred as 'kalvit' and the male blackbuck easily stands out from among a group of antelopes for its long spiral horns roaming in the grasslands.

The tradition of protecting the blackbucks has been going on in full swing since the rule of Bishnois of Rajasthan. Though the park is small in size as compared others, hardly 2.17 square kilometers, but it provides interesting exploration trails. Apart from the blackbucks, here one can spot chinkaras, wolves, and the Indian fox too. Trekking is the best way take a stock of the sanctuary. And if tourists have extra time at their disposal, then they should visit Lord Ganesh temple and Rashin Devi temple. All those who have been waiting for so long to see the elusive sight blackbuck, do visit the Rehekuri Wildlife Sanctuary.

In the park, tourists can either take a jeep safari or can trek through the long stretches of the flimsy yet narrow road with their guide. Since the topography keeps on changing, it would be better to take a jeep safari. But the best part about the trekking in the jungle is that the forest is very thick and by walking, one can easily spot very easily. 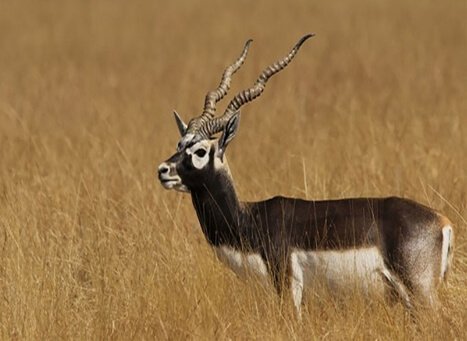 By Airways: Lohegaon Airport (Pune), three to four hours drive from the Rehekuri Blackbuck Sanctuary, is the nearest airport.

By Roadways: Since the sanctuary is located in outskirts of the Karjat, it is clearly noticeable from the main road.
Pune - Patas - Bhigwan - Karjat - Rehekuri: is the common route to reach the park
Buses from Aurangabad (114 Km), Pune (123Km), Nashik (156 Km), Beed (127 Km) and Solapur (226 Km) are easily available to reach the sanctuary.