In the shadow of the western ghat lies the Radhanagari Wildlife Sanctuary, which is home to more than 600 Bisons and various types of rich flora and fauna. Also known as the Dajipur Sanctuary, the park was formed in the year 1985 and immediately rose to fame due to its location. An ideal weekend getaway for wildlife enthusiasts of Maharashtra, this 351.16 square kilometers forest reserve nestled in the hotspot of biodiversity, Western Ghats, is a must visit to see bison, tiger, leopard, sloth bear, Giant Squirrel, Mouse Deer, Barking Deer, and so on.

Along with rich fauna comes the affluent flora, which has been blooming due to numerous streams scattered in the park. In the park, there are two dams; one constructed on Bhogavati river (Radhanagari Dam) and other on river Dudhganga (Kallamwadi Dam). These two dams attract numberless bird species like vultures, eagles, jungle fowl, quails, plovers, sandpipers, owlets, doves, owls, nightjars, to name a few. Also in the national park, one might see flycatcher fluttering their wings and collectively generating a peculiar sound.

To witness the beauty of the national park, one should visit in the morning and evening; in the afternoon animals retire as its too hot outside. Don't forget to visit the Bison point, 25 km in the interior of the reserve, which is a perfect place to see the view of the park. 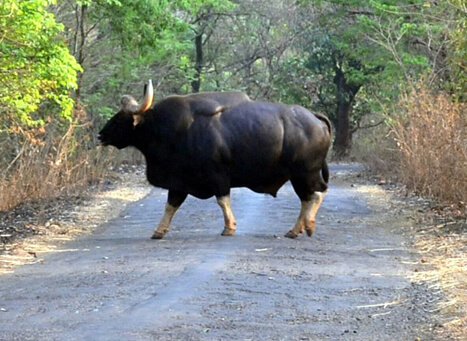 The sanctuary remains closed between June and October. Best time to visit the sanctuary is during winters (November, December, January, February, and March). April and May are a good time to visit, but one should be prepared for the hot and humid weather. It may rain during November.

In the park, tourists can either take a jeep safari or can trek through the long stretches of the flimsy yet narrow road with their guide. Since the topography keeps on changing, it would be better to take a jeep safari. But the best part about the trekking in the jungle is that the forest is very thick and by walking, one can easily spot very easily.

By Airways: Pune Airport in Lohegaon is the nearest Airways base.

By Roadways: To reach the wildlife sanctuary, state transport buses are available from the Kolhapur. Else, one can also take a private taxi.