Hardly a sixty-kilometer drive from Mumbai, the financial capital of India, nestles Karnala bird sanctuary where there is greenery all around; a place where colorful birds come together to form a kaleidoscope in the sky; visitors usually wake up with the rooster crow cock a doodle doo and end your day with fireflies creating a magical woodland glow. Apart from its enormous winged beauties that light up the sky as soon as the dawn settles, the sanctuary features a grand Karnala Fort, which if seen from a distance looks like a funnel-shaped loudspeaker, and in Marathi, it is called a ‘karn.' Such beautiful are the terrains that even the park greets one with a "thumbs up," which is as a matter of the fact is a pillar at the center of the fort. And that's the reason why the place earned a nickname - Karnala ‘Thumbs Up’ point. To reach the top of the park - Karnala Fort, one should do strenuous trek for six kilometers. Moreover, many prominent treks touch the park and perhaps that the only way one can explore this bird kingdom.

All thanks to the remarkable efforts of Dr. Salim Ali, the bird man of India whose main motto was bird preservation in the country, the sanctuary caught up the attention of Maharashtra government. In the year 1968, the park was declared as the bird sanctuary. Currently, it boasts of 150 resident and 37 migratory bird species that visit the here during the winter. Ashy Minivet, three-toed Kingfisher, and Malabar Trogon are some of the rare bird species that can be spotted in the park. And recently, a leopard was also spotted in the park. With the change in weather, the population of the sanctuary keeps on changing. It's during the monsoon; the park is in its full glory; the vivid collection of species such as Paradise Flycatcher, Magpie Robin, and Malabar Whistling Thrushes, come together to sing songs. During this time, the sanctuary turns a brilliant green, and dozens of little rivulets spring up and flow by. 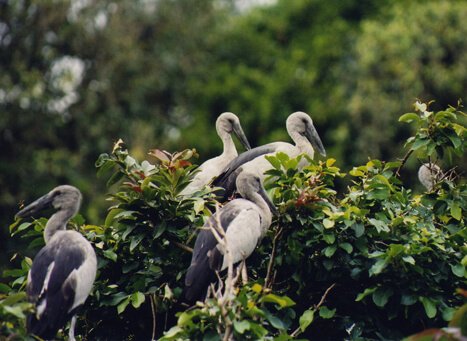 From sunrise to sunset

By Roadways: Those traveling via public transport; state tourism buses and autorickshaws (6 seaters) are available from Panvel. Buses arrive every 30 minutes. Travelling by personal car would be a good option as its is hardly 2 hours from Mumbai and the roads are smooth.

By Railways: Panvel Railway Station, 12 km from the park, is the closest railway station. Since it is located in the suburbs of Navi Mumbai, many express trains make a short stopover here.

By Airways: Chhatrapati Shivaji International Airport in Mumbai is the closest airport to reach the bird sanctuary.