Fascinating geographic features, luscious landscapes and a vast range of activities- Painganga Wildlife Sanctuary is much more than a refuge for the animals. In this 325 square kilometers land of a wildlife sanctuary, one can expect such rich, diverse flora and fauna that it would be hard to ignore revisiting here again and again. The wildlife sanctuary got its name from the facts that it is flanked by river Painganga or Penganaga River on the three sides. The Central region of the sanctuary is dominated by a wide valley, which forms the border of Nanded and Yavatmal districts. Not only the landscapes but the vivacious variety of flora and fauna too also makes the tourists trip to Painganga Wildlife Sanctuary a little more interesting.

An exquisite mixture of southern mixed deciduous forests and dry teak forests shelters a good number of undomesticated animal species like Chinkara, the Black Buck, the Nilgai Sambar, the Four Horned Antelope, Hare, Jackal, Leopard, Fox and much more. Also, a pleasing number of birds can be heard chattering in the sanctuary like Vulture, Bulbul, Dove, Kingfisher, Cuckoo, and much more. Considering so much this sanctuary is offering to tourists, this year, Maharashtra Government decided to start a jungle safari in the year 2016.

In the year 2016. Jungle Safari was started on 56 km stretch of Painganga Wildlife Sanctuary. The route will cover all the three regions of the park. 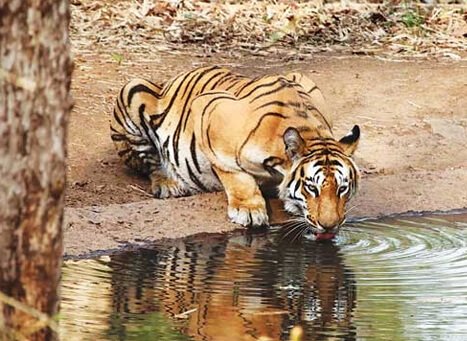 By Airways: Dr. Babasaheb Ambedkar International Airport in Nagpur is the nearest airport; it's 250 km away.