Either for the famous Shiva shrine or lush jungles giving shelter to the Maharashtra's National Animal - Indian Giant Squirrel; one can consider Bhimashankar as their next holiday destination for any one of the above reasons. This 131 sq kilometer sanctuary, covering nine tribal villages, was formed in 1984 to protect the habitat of Indian Giant Squirrel. A beautiful version of the jungle, the park elopes in the Western Ghat mountain range and features waterfall and various water bodies, which evidently makes it a must visit for the trekkers. Since its comes under the Western Ghats, here one can find eccentric endangered plant species, which makes it a power station of herbs. And perhaps its the flora, mainly the sacred groves that have been here for centuries, are the reason why the park has somehow able maintain its sanctity. With such lush flora and presence of water bodies, obviously here one tend to find some imperil bird species like Indian Peafowl, Little Grebe, Grey Nightjar, Crested Treeswift, to name a few.

When on a trip to Bhimashankar wildlife sanctuary, don't forget to visit the Forest Interpretation Centre, which equipped with a library and nature-related guidance centers; a wonderful place where kids can visit. For the thrill seekers, there are not only jungles but also forts like Shivneri, Kothaligad, Padargad, and Siddhagad.

From pilgrimage tour to nature walk to wildlife spotting; with so many things to do and places to explore, a visit to Bhimashankar wildlife sanctuary on a holiday in Maharashtra is a must.

Flora and Faunna of the Sanctuary

Bhimashankar Wildlife Sanctuary is mainly known for its extravagant population of Indian Giant Squirrel, the state animal of Maharashtra, and birds. Here one can spot endangered species like Greater Spotted Eagle, Lesser Kestrel, Jerdon’s Baza, Nilgiri Wood Pigeon, Malabar Parakeet, Malabar Grey Hornbill, Small Sunbird and Southern Tree Pie. Also, a good variety of animals can be spotted in the park like barking deer, leopards, wild boar, sambar, hyena, and langur. When it comes to flora, its spectacular range of plants includes 14 sacred groves (also known as Doris), Harad (Terminalia chebula), Bel (Aegle marmelos), Tarwar (Cassia auriculata), to name a few. When the dawn falls, and the darkness is at its peak, groups of fireflies gather and illuminates the forest.

To double the fun of a trip to Bhimashankar Wildlife Sanctuary, one can also visit the other highlights like Malshej Ghat, Junnar Caves, and Shiva temple (one of the 12 jyotirlingas).

October to December & January to May

To witness the beauty of the wildlife sanctuary, one should visit during the monsoon season. Moreover, during this time one can see many fireflies. 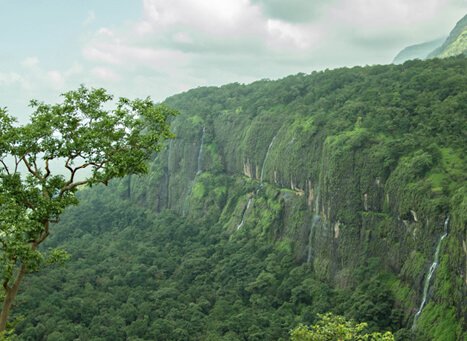 As such there are no safaris organized by the Maharastra wildlife tourism supervisors, thus to explore its vicinity one can go for trekking. In an attempt to attract tourists, wildlife tourism department of Maharashtra is planning to start four walking safari trails spanning across two, four, six and 10 kilometers. A guide would accompany tourists to show in and around the wildlife sanctuary.

By Roadways: State-owned buses are easily available at the regular interval from Shivajinagar Bus Terminus. Else, a private transport can be a good option to reach the.

By Airways: Pune Airport, 145 km from the park, is the nearest airport.