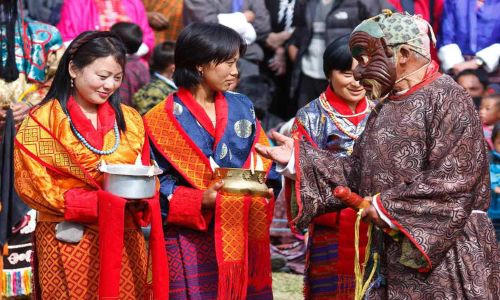 An interesting festival held to commemorate the establishment of Jambay Lhakhang Temple. The festival features unique dance forms like Terchham or Naked Dance which is held at midnight inside the temple premises. Locals and tourists are not permitted to witness the dance form, but they can enjoy watching the Mask or Cham dance which is common to all events, fairs and festivals in Bhutan.

The Jambay Lhakhang Drup festival is celebrated over a course of five days. Here are the festival dates in case you are planning on attending the festival on your next tour to Bhutan.

Jambay Lhakhang Drup is held in the town of Jakar, which is also officially known as Bumthang. The name Jakar means “white bird” in the local language. There is a popular story behind the Jakar Dzong (a structure in Bhutan which served various purposes, from administrative to religious). It is believed that the location of this monastery was indicated by a roosting white bird around 1549.

There are so many things that go into making Bhutan an attractive tourist destination. It has a beautiful landscape, lovely people, monasteries and an interesting culture. Part of that culture is its colorful and exciting festivals, which should be attended by everybody during their Bhutan tour. One of these popular festivals in Bhutan is Jambay Lhakhang Drup, which is held over a course of five days and attracts tourists in large numbers.

The Jambay Lhakhang Drup is one of the festivals in Bhutan held in Jambay Lhakhang Temple, located in Bumthang. It is one of the 108 temples built in one day by the 7th century Tibetan king Songsten Gampo. There is an interesting mythology behind the construction of these temples. It is believed that a fierce demoness prevented the preaching of Buddhism in the region by resorting to various tricks and threats. To defeat her evil designs, 108 temples were constructed on her body parts. These spread across Tibet, Bhutan and the nearby areas.

The festival is marked by various mask dances, which are called chams in the local language. Although this kind of dance is common to all events in Bhutan, what sets apart this one is the Tercham, also known as the naked dance. However, if you are excited about attending this dance, hold on! It is performed at midnight inside the premises of the temple. Tourists as well as locals are not permitted to watch the dance. In the evening, a fire dance is held to bless infertile women with the hope of blessing them with children. It is believed that these dances were started by Terton Pema Lingpa, a famous Buddhist saint whose importance in Tibetan Buddhism is next only to that of Padmasambhava. Other dances which are held during the course of this amazing Bhutanese festival are Mewang, Macham, Ging Tsholing, Dramtse Ngacham, Zhana Cham, apart from others.