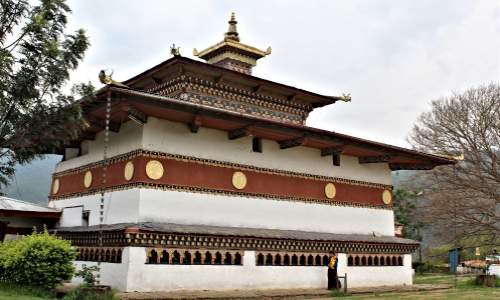 Ever wanted to visit Bhutan, a place where GNP (gross national happiness) is used to measure its progress and development? The 05N/06D Bhutan Fixed Tour takes you to the most famous tourist attractions in this beautiful country. Far away from the madness and commotion of everyday life, here you find tranquility in abundance. You discover that there is so much to celebrate about life, and that the definition of happiness itself, is quite different from what you know. Nature, people and culture, all three come together to create a harmonious and joyous existence. This Bhutan fixed departures tour lets you visit the monasteries, temples and other places of cultural, historical and religious interest, along with your family and friends. During your Thimphu, Punakha & Wangdue Sightseeing Tour, you experience happiness in many ways. You smile every time you watch a cloud dancing away on the mountain tops, and let out a peaceful sigh when your eyes meet a monastery perched on a steep cliff. As part of your Thimphu sightseeing tour, you get the chance to visit, among other places, the Motithang Takin Preserve, whose main attraction is Takin, the national animal of Bhutan. Every time your eyes meet those of the Takin, you are immediately overcome by an array of emotions. The popular tourist attractions in Paro also promise to make your sightseeing tour an exciting and thrilling one, an example of which is the two-hour hike to the Taktsang Monastery. Adventure and spirituality, that’s what this Bhutan Tour is all about. During the course of it, you learn about various legends, explore the beauty of its dzongas and revel in the pure air of the surroundings.

Your 5N/6 Days Bhutan Package starts with your arrival at Paro Airport. After landing, you will be transferred to Thimphu, the capital city of Bhutan, by car.

Located at an altitude of 7710 ft, it is the commercial and cultural capital of the country and is dotted with several restaurants, shopping centers and nightclubs. The city endears itself to tourists because it easily amalgamates traditional culture with modernity. It is one of the few capital cities in the world which does not use traffic lights. If there is a place which reflects the spirit of the country as a whole, in terms of its dress, literature, customs, music and dance, it is this.

After arriving at Thimphu, complete your check-in formalities at the hotel. In the evening, you can choose to explore the city’s attractions on foot. There are several options for sightseeing and exploration in this city, and you can be sure of having a good time.

Your day starts with a delicious breakfast after which you will set off an exciting Thimphu sightseeing tour. Some of the places which you will visit as part of your tour are Kuensel Phodrang, National Memorial Chorten (Monument) and Folk Heritage Museum. In the afternoon, you will visit the Sangaygang View Point, Changangkha Monastery and Takin Preserve Center. This wildlife reserve area is located in the Motithang district of Thimphu and is home to the shy and reserved Takin, the national animal of Bhutan. It attracts special attention due to its unique appearance, as you will find out during your visit. Enjoy the greenery and fresh air of the surroundings here. In the evening, you will visit the Tashichho Dzong, also known as the Fortress of the Glorious Religion.

This imposing structure is surrounded by perfectly manicured lawns and lovely gardens, both of which play a big role in enhancing its aesthetic appeal. It served as the seat of government till 1952 and today houses the secretariat, throne room and offices of the king.

Start your day with a delicious breakfast and then drive your way to Punakha/Wangdue. You will make a halt at Dochula Pass, situated at an impressive height of 3150m approx. This place affords you spectacular views of the higher Himalayas. Visiting the 108 memorial chortens, known as Druk Wangyal Chortens in the local language, is one of the things to do here. These were built to commemorate the Bhutanese soldiers who lost their lives in the battle against insurgents. Pay your respects and revel in the delightful surroundings. Continue your drive until you arrive at the hotel. Post arrival, complete your check in formalities at the hotel. Rest and relax for some time.

In the evening, you will visit Punakha Dzong, one of the famous tourist attractions in Punakha. It is undoubtedly one of the most beautiful dzongs in all of Bhutan, besides being the second oldest and the second largest. Its whitewashed walls are brought into sharp contrast by the jacaranda trees surrounding it. It served as the seat of government of Bhutan until 1955, before the capital was finally shifted to Thimphu. This fabulous structure was built by Zhabdrung Ngawang Namgyal in 1637 and still serves as the winter residence of Je Khenpo (The Chief Abbot of the Central Monastic Body of Bhutan). It is also famous for hosting the festival of Domche which attracts people from all over the country. Two particular attractions inside the dzong are the murals depicting scenes from the life of Gautam Buddha along with the enormous statues of Guru Rinpoche, Lord Buddha and Zhabdrung.

From here, enjoy a short hike to Chhimi Lhakhang. Famously known as the Temple of Fertility, it was built by the 14th Drukpa hierarch, Ngawang Choegyel. It was blessed by Drukpa Kunley (a Tibetan monk and missionary of the Tibetan Mahamudra tradition), famously known as “the madman”. The monastery, apart from its historical, cultural and religious significance, is also famous for a peculiar tradition in which pilgrims are struck on the head with a wooden penis measuring 10 inches.

You have the entire evening to yourself and can spend it any way you like.

Your day starts with a healthy breakfast after which you begin your drive to Paro, a place so beautiful that it always finds a presence in every Bhutan tour package. Make a short stop at Lamperi to visit the Royal Botanical Park. It is famous for being the first botanical park in Bhutan and is home to 46 species of rhododendron and 115 species of ferns. The park is also home to an impressive variety of fauna including red panda, tiger, leopard and musk deer. It also houses two rare species, the monal pheasants and blood pheasants.

After arriving in Paro, complete your check in formalities at the hotel and spend some time in rest and relaxation. In the afternoon, you will visit Ta Dzong, another of the popular tourism attractions in Paro. Ta Dzong is the national museum of Bhutan and boasts several galleries, each exhibiting a particular aspect of Bhutan’s culture, heritage and history. From the ancient coins used in the country to the kind of weapons employed in warfare, the museum has it all. Some of the attractions of the museum are horse egg, an arrow head dating back to the 12th century and a statue over 1000 years old.

After exploring the museum, make your way to Rinpung Dzong, which in local language means the “fortress of heap of jewels”. It is an enormous monastery and fortress which houses the government administrative offices and the district monastic body. The complex houses various temples and shrines. Tshechu, an annual Bhutanese religious festival, is held here in the month of March or April. The masked dances held during the festival is a particular crowd favorite. Explore the dzong and understand its historical and cultural significance. You have the entire evening to yourself and can spend it at leisure.

Start your day with an enjoyable breakfast and then prepare to go hiking to Taktsang Monastery, undoubtedly the highlight of your Paro sightseeing tour. Its name means Tiger’s Lair and it gets its name from a famous legend. It is believed that long back in time, the local people came across a tigress in one of the caves. The tigress was actually Yeshi Tshogyal, a companion of Guru Rinpoche. She had transformed herself into a tigress in order to defeat and conquer the evil spirits lurking in the region. Located at a height of 2950m, it is one of the most important Buddhist monuments in the Himalayan region. The location of the monastery catches your attention as much as its history and the legacy associated with it. One of the many attractions inside the shrine is the paintings which depict the eight manifestations of Guru Padmasambhava and his eight disciples. To reach the monastery, you will have to take a hike of almost 2 hours, but every bit of the birth is worth it.

After visiting this monastery, you will also visit the Drukgyel Dzong and Kyichu Monastery. According to various historical sources, the monastery was built in 1639 to commemorate the successful repeal of an invasion from Tibet. Although most of it lies in ruins today, it is worth exploring because of the immense cultural importance it holds. Kyichu Monastery is counted among the oldest monasteries in the country and is a part of the 12 temples out of the 108 temples which were built in the seventeenth century. It is believed that the original temple was built in the seventh century by the king of Tibet, Songtsen Gampo. According to a famous mythological tale in Tibetan Buddhism, a giant ogress stood in the way of the establishment of Buddhism in Tibet. To subdue the ogress, he pinned own her left foot by building the temple. Upon visiting it, you come across elderly pilgrims engaged in deep meditation and spinning the prayer wheels as part of their circumambulations. The deeply spiritual environment does have a positive impact on you.

You will begin your day with a lovely breakfast followed by check out formalities. This is followed by a transfer to the airport to catch a flight for your onward journey. It has been an extremely enjoyable journey into the heart of Bhutan and for many years to come, you will remember it as one of the best trips ever.

Highlights of the trip

Inclusion of the trip

Exclusion of the trip

Other Similar Wildlife ToursView All 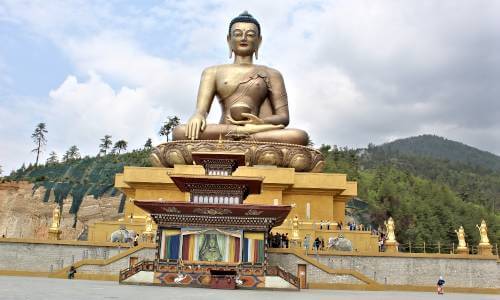 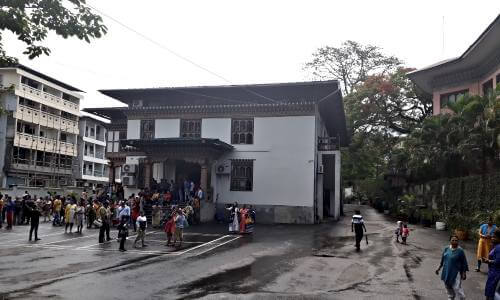 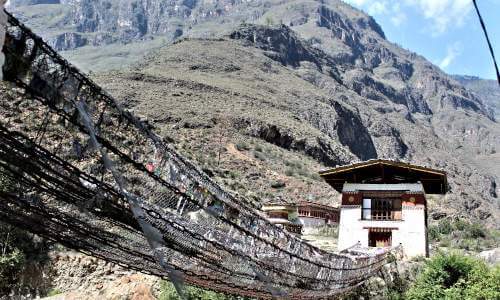 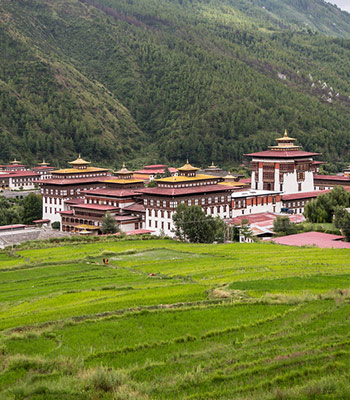 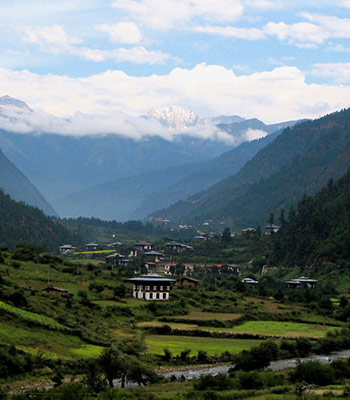 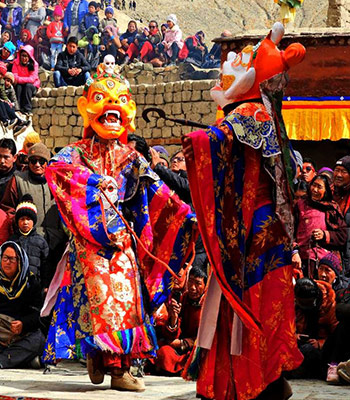 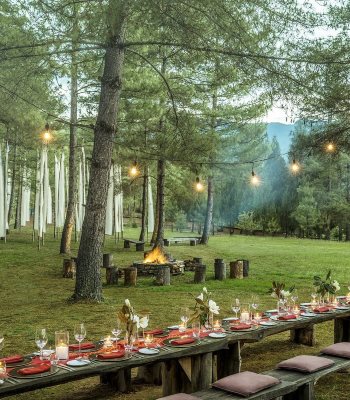 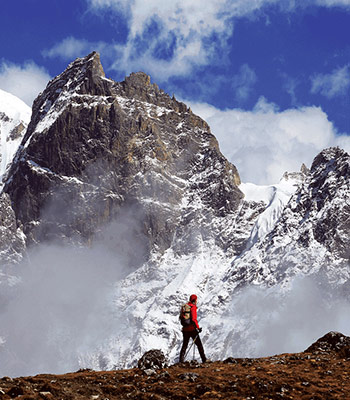 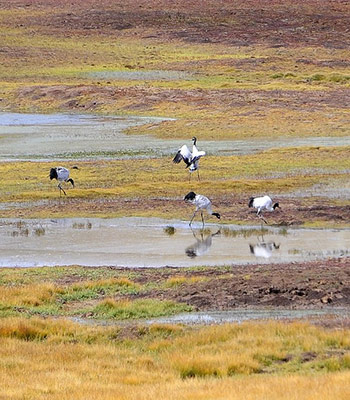 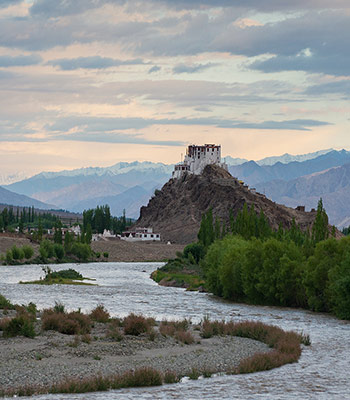 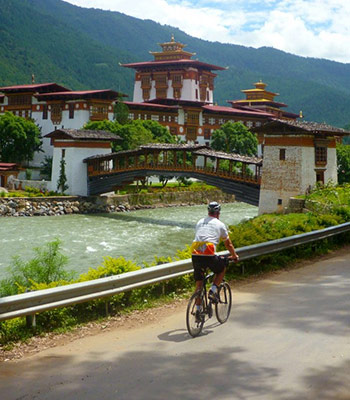 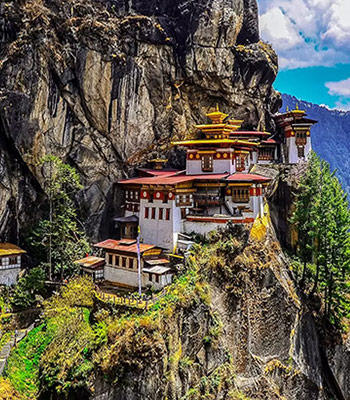 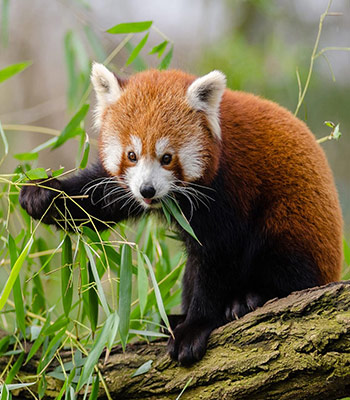