St. John’s Catholic Church is the fine display of the architecture belonging to the British era. In the 18th century, major number of military units were positioned at Ahmednagar, but there were no shrines situated near to them for their sacred revival, even the padre used to arrive from Kirkee. So finally the church was built by the britishers for the soldiers. Being a historical monument, St. John’s Church is the major tourist attraction of Ahmednagar. As per the church register, the Auxiliary Horsed Cavalry were the first British army unit to arrive at this place in the year 1817. Later, a large contingent of troops of East India Company were sent at the site by 1830 and the place became a huge cantonment.

In the church cemetery, one can find many graves of British army soldiers who were stationed in Ahmednagar. On a visit to St. John’s Church, make a point to see the other two churches, the Roman Catholic Church and the Episcopalian Church. Presently, the church is operated by the Salesians of Don Bosco.

The St. John’s Catholic Church is situated at Bhingar, which is at the outskirts of Ahmednagar. The closest railway station is Ahmednagar railways station (7 km) and well connected with others cities through roads also. And the nearest airport is at Aurangabad with 110 km. 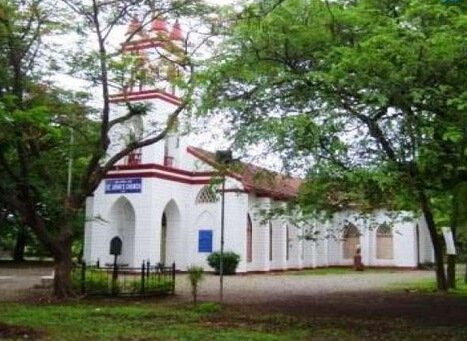