Located 13 km away from Ahmednagar at Mehkri, a three storey stone structure sprawled on the crest of a hill - Tomb of Salabat Khan II, erroneously known as Chandbibi Mahal or Chand Bibi Palace, is a beautiful tomb stretched into the distance as far the eye could see. Each level is encircled by verandahs and huge casements, thus allowing ventilation from all directions of the tomb. The basement carries the relics of the constructor and his wife buried in it, whereas three other graves of Salabat Khan’s wife; Chand Bibi and their sons reside outside the tomb. Salabat Khan II, was a loved and respected minister of Murtaza, the fourth Nizam Shah, who ascended the throne in the year 1565 and announced Salabat Khan as his minister in 1579, after killing his own minister in a fit of anger and suspicion.

The octagonal structure of the tomb is away from all intricacies and doesn’t boost of any architectural supremacy. It is believed that the planning was for to built seven stories, but only three were finally built. The tomb is about 939 m above sea level, is now used as military sanitarium. It offers splendid views of the lush green hills and the whole of the city, that makes the visit to this ruined and depleted place worthwhile. 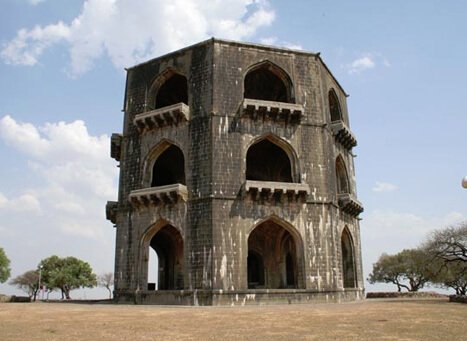