Holi or the festival of colour, is a spring festival celebrated by the Hindus of India and Nepal. It falls in the month of Phalgun, which according to the Gregorian calendar is late February or early March. Though a Hindu festival, Holi is celebrated by the people of other religions and has now started spreading to South East Asian and European countries too.

The celebration of Holi starts a night before the actual date, with the burning of Holika. People gather around the bonfire and conduct rituals and pray. It is said that by doing this, the inner evil of the people get destroyed as the Holika starts burning. The next morning is the Rangwan Holi or a carnival of colours. Participants play with coloured water and abir, or dyed powder. Children fill balloons with coloured water and throw them at people, they can even throw these at non participants and strangers alike. It is a fair game for all, whether rich or pool, old or young, known or unknown. Holi celebrations are often arranged in open parks where people can participate.

It is an ancient festival and the name has been derived from the term Holika which means burning.

Hiranyakashyap, an Asura wanted everyone in his kingdom to worship only him. However, Prahlad, his son became a devotee of Narayan. So Hiranyakashyap ordered Holika, his sister to enter a burning fire with Prahlad in her lap, as she had a boon of entering a fire and yet not get burned. However, that boon worked only if she entered the fire alone. Holika lost her life while Prahlad was saved by Lord Narayana for his extreme devotion. Thus, Holi marks the end of evil and triumph of real devotion.

Lord Krishna is also associated with Holi as he celebrated this festival with Radha and his gopis.

Holi starts on Poornima (full moon day) and is two-day festival. Day one is Chhoti Holi or Holika Dahan and the second day is Rangwali Holi. Rangpanchami is the day people play with colours in Maharashtra, and it comes after five day from Phalgun Poornima. 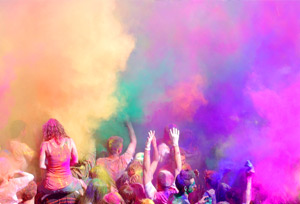 Important Rituals of the Festival

The celebration of Holi in Maharashtra is incomplete without their delicacy, Puranpolis. Holi is more common among the fishermen of Maharashtra though now, it is celebrated all across the state. Important rituals include: