Dusshera, which is also popularly known as Vijayadashmi, is a widely celebrated Indian festival held on the 10th day of month of Ashvinas per the Hindu calendar. This day falls generally in the month of September or October of English calendar. The day comes after a 9 day fasting period of Navratri in the Hindu ethos. Immersion of the idol of Goddess Durga also happens on this day. Dusshera is celebrated to memorialize the slaying of the demon Ravana by Lord Rama. Vijaya Dashami is also the day where the slaying of demon Mahishasur is done by Goddess Durga. Dusshera festivity is done so as to spread the knowledge and faith that evil is always defeated by good. In Maharashtra, Dusshera is celebrated with the skit of Ramayana being performed and enjoyed as “Ramleela”.

Highlights/Important Rituals of the Festival

During the 17th century, it is believed that King of Mysore had ordered the celebration of the festival of Dusshera on a large scale. Since that passage of that order, Dusshera has been celebrated ever since with great mirth, fervor and devotion. According to Hindu mythological tales, Dusshera is the propitious day as 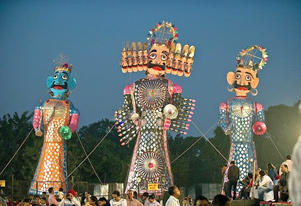 because Lord Rama had killed demon Ravana on this day and had won the Kingdom of Lanka. It is said in Ramayana that Ravana had kidnapped Lord Rama’s wife, Sita and hence had been a tyrannical and cruel ruler of all.

During the months of September and October of each year, you’ll find the state of Maharashtra getting geared up for this festival.