When it comes to religious tourism, Assam is such a place that crosses everyone’s mind owing to its several pilgrimage destinations. The Eastern Indian state of Assam has variations of several religions and culture that flourished in its lap over the passage of time. Many temples and monuments are built in this state which reflect different traditions and religious beliefs. People often search for spiritual getaways to get relief from the hurdles and tensions of their life and Assam is one such ideal place.

There are several Hindu temples in Assam, among which, one of the holiest temples of the Hindus is the most famous Kamakhya Temple. This temple is regarded as the Shakti Peeth and is the most visited temple by the Hindu pilgrims in the state. Located on top of the Nilachal Hills, this temple is an icon of belief and has mythological story attached to it. This holy place experiences a huge crowd of devotees during the Manasha puja and Ambubachi.

There are several small temples surrounding the main temple which are dedicated to many deities and are collectively called the Dasa mahavidya. Another notable temple in the city is the Nabagraha which means the temple of nine planets. This shrine had been the centre of study of astrology during the earlier times. 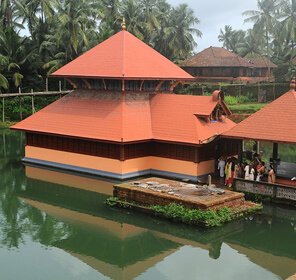 The Umananda Temple located at the center of the Brahmaputra River is another Hindu place of worship which attracts the devotees of Lord Shiva. In this temple the occasion of Maha Shivratri is celebrated in a grand manner and a huge number people observe fast and offer their prayers on this holy day.

The Mahamaya Temple is another prime pilgrimage site located in western Assam where a group of temples dedicated to Lord Shivacan be seen. It is believed that if one ties tiny bell on a banyan tree located in the temple then the person’s wishes comes true.

With several satras or the Vaishnavite monasteries, Majuli is a major sightseeing site in Assam. Dating back to the 16th century, Satras are an unique feature of Vaishnavism that was propounded by Sankardeva. Apart from being monasteries, Satras are centres for traditional performing arts. Currently, there are only twenty two satras amongst the sixty five monasteries preaching of socio-cultural ideals. These satras also provide guest accommodation. Some of the noteworthy satras are Auni-ati, Dakhinpat, Kamalabari, Garamur, Samaguri, Bengena-ati and Natun Kamalabari.

There are several other popular holy places in Assam like the Powa-Mecca, Christ Church and the Gurudwara Sri Guru Tegh Bahadur Sahib.

The Sri Purva Tirupati Balaji Temple is a very recent addition made to the list of temples in Guwahati and has become the major attraction of the city. It is dedicated to Lord Balaji and there is also a Ganesha shrine at the entrance of the temple. Sukreshvara Temple, Satra and the Ugratara Temple are the other mentionable pilgrimage sites of the state.

So if you are planning for pilgrimage tour to Assam, the state has a lot to offer you irrespective of what your religious views and beliefs are.

Find Hotels in Assam by Destination

Top things to Do and See in Assam

Assam Travel Information at a Glance