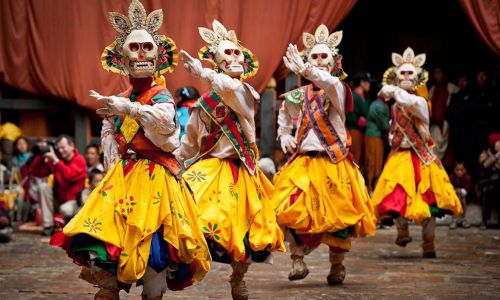 Celebrated in remembrance of Guru Rinpoche, the festival held in Jakar Dzong displays several sacred masks, the special ones are performed by the Buddhist Monks. This is the time when tourists visiting Bumthang can learn about the rich culture and tradition of Bhutan. Also, various kinds of tricks performed by Astaras is not to be missed when attending Jakar Tshechu.

Jakar Tshechu, a famous festival in Bhutan, is celebrated over a period of three days. The festival dates are mentioned below.

Jakar Tshechu is held in the district of Bumthang. It is one of the holiest and most beautiful places to visit in Bhutan. The entire district is dotted with several temples and monasteries. Before planning a visit to Bhutan, you should know the rules and regulations related to the visa process. Citizens of India, Bangladesh and Maldives do not require any visa, while foreign nationals are required to do so. You can apply for a visa online via a licenced Bhutan tour operator.

Rejoice in the sacred mask dance performed by Buddhist monks

One of the top tourist attractions of Bhutan are its colorful festivals. Marked by masked dances, chanting of hymns and all kinds of religious ceremonies, they offer a great opportunity to observe the country’s traditions and culture. If you do decide to take a Bhutan festival tour, then attend the famous Jakar Tshechu festival.

The Jakar Tshechu is held at the Jakar Dzong (a fortress like structure used for various purposes, from administrative to religious) in Bumthang. It is also known as the “dzong of the white bird” and rests atop a hillock which overlooks Chamkhar town. Here is an interesting fact related to the architecture of the dzong. Behind the structure are four stairs which lead to a water reservoir. This water reservoir has a historical significance, as during the olden days, it provided water to the troops during battles. This famous festival in Bhutan is held over a course of three days. During this time, schools, offices and administrative work of the district are closed so as to enable the people to enjoy the festival.

As a rule, Tshechus, one of the most popular cultural events in Bhutan, are celebrated on the 10th day of the Bhutanese calendar month. The term itself denotes the tenth, and it is widely celebrated as the birthday of Guru Rinpoche. Among his followers, he is revered as the Second Buddha for his wisdom, philosophy and enormous contribution to Buddhist religion. During the course of the festival, different kinds of masked dances are held, a special attraction among them being the ones performed by Buddhist monks. These are accompanied by songs and dances by the local villagers. The festival brings everybody together.

In one of these dances, a corpse look alike is laid on the ground, followed by masked dancers performing a kind of curious spiritual dance. In between, a monk makes his way into the middle of the action, holding a triangular black box in hand. The outside bears the painting of a skull. During the time these steps are performed, the audiences watch with astonishment, impatient for the next step. Other dances which are performed during the course of this festival are the dance of the fearsome deities, the dance of the judgement of the dead and the dance of the eight manifestations of Guru Rinpoche.

The entire occasion is made even more celebratory by the Astaras (although called jesters, they play a very important part during the celebrations surrounding the festival). These jesters walk around performing various kinds of tricks to keep the audiences entertained. Strangely, they walk around holding a wooden phallus in their hand, and occasionally, direct it to one of the onlookers. It is believed that the wooden phallus represents the infinite wisdom and accomplishments of some saint.