One of the most popular tourist destinations and stupas in Eastern Bhutan, the Chorten Kora delights tourists with its splendid design and pristine ambience. Modeled after the famous Boudhanath Stupa in Nepal, the Chorten Kora is a fascinating display of Buddhist architecture and offers a captivating spiritual excursion next to the gleaming Kulong Chu River in Trashiyangtse. This magnificent structure of great religious and cultural significance was built in the 18th century over a period of 12 years by the Lama Ngawang Loday, the nephew of the much revered Buddhist Lama Shabdrung Ngawang Namgyal.

Like most of the other famous chortens in Bhutan, the Chorten Kora also has a rich and fascinating tale behind its establishment. According to this story, when the Lama Ngawang Loday went to Nepal, he was so impressed by the awe-striking grandeur of the Boudhanath Stupa that he decided to build a similar looking structure in Bhutan so that the people of Bhutan could visit this place instead of making the taxing journey to Nepal. To accomplish this task and to ensure that the design of the chorten remained immaculate, he brought back a model of the Boudhanath Stupa carved in a radish. However, the radish shrank during his return trip to Bhutan and because of this reason; the Chorten Kora is not an exact replica of the Boudhanath Stupa.

In front of the Chorten lies a natural stone stupa, called the sertho, which is considered holy and sacred by the people of Trashiyangtse and the neighboring communities. Apart from this, the Chorten also boasts a small goemba which offers you the chance to go on an enthralling spiritual journey in these Himalayan highlands.

Bhutan is a land of a wide array of rich mythological tales, folklore and legends. According to one such legend, the stupa was built on the spot where the Lama Ngawang Loday subdued a demon that used to terrorize the local people and travelers. It is widely believed in these regions that when the construction of the Chorten was about to be completed, it was visited by the princess Ashi Cheten Zangmo of Tawang, who entombed herself inside the thick walls of the Chorten as she meditated for the prosperity of all sentient beings.

To celebrate this noble sacrifice of the princess, the Chorten becomes a popular annual pilgrimage site for the people of Tawang. They visit this sacred site every year during the Chorten Kora Tshechu on the 15th day of the first lunar month and pay their respects to the princess. This auspicious day is called ‘Dakpa Kora’ and it marks an important occasion in the lives of the people of Tawang.

On the other hand, the Bhutanese people circumambulate the Chorten and pay their respects on the occasion of ‘Drukpa Kora’, held at the end of the first lunar month. The peak of the stupa leans towards Tawang and this serves as a powerful symbol of the intimacy shared by the people of the two regions. During the lunar month of the Bhutanese calendar, the Chorten Kora also becomes home to the famous Chorten Kora Tshechu which is a grand carnival of celebration of the local Bhutanese culture and traditions. 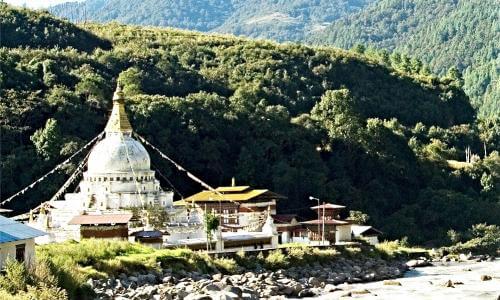