The Gateway of India was built during the 20th century in Mumbai City of Maharashtra. This mammoth attraction stands on the waterfront in the Apollo Bunder area of Southern Mumbai and overlooks the pristine Arabian Sea. It is timeless as one of the most famous tourist attractions in Mumbai as it still gives a person the feel of the moment of freedom and Indian independence, enshrouded with patriotism.

It is referred to as the Taj Mahal of Mumbai as it is the city’s top tourist attraction. Scottish architect George Wittet sanctioned the final design in 1914 and completed the monument by 1924 which was inaugurated on 4 December of the same year.

The structure is a basalt arch of height reaching to 26 m (85 feet). The architectural style is Indo-Saracenic having an elevation of 10m (35 feet). The design of monument is of both Indian and Muslim style as decorations match the Indian style while the arch portions belong to Muslim style of architecture. It was built using concrete and yellow basalt. The stones were locally obtained but the perforated screen was brought from Gwalior.

The central dome is 48 feet (15m) in diameter and 83 feet (25m) above the ground. On both the sides of the arch there are two halls which can accommodate around 600 people. The cost of construction is 2 million borne mainly by the government of India. The front harbour was aligned in such a way that the planned esplanade sweeps down to the centre of town.

The Gateway of India stands for many historic ups and downs of Mumbaikars. Britishers decided to make Gateway of India in march 1911 to welcome king George V and queen Marry. However, they only got to see a cardboard model as it took 4 years to complete the construction. The first foundation was laid down by the governor of Bombay Sir George Sydenham Clarke on 31st march 1911. The Gateway was opened by the Viceroy on 4th December 1924. It also signals the end of British rule as last British troops leaving India passed through the Gateway of India.

It is at the end of Chhatrapati Shivaji Marg and near Taj hotel in Mumbai, which is well connected to the rest of the city by all forms of public transport. Visitors can also reach this place by boat ride. 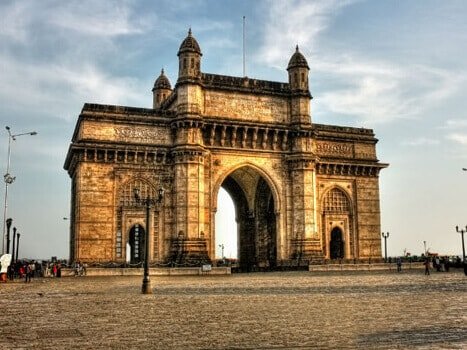 Things to do and see in and around

One can visit this monument for sightseeing and boating. Apart from that one can discover sailing in India, Indian museum ship, enjoy a food tour with local cuisine eateries there, visit the nearby art galleries, and the temples.

Opening time is 12 am and closing time is 12 pm. It is open on all days even on public holidays. No ID is required to visit this place.

One can visit here in all seasons but during night Gateway of India looks more beautiful and signifies its glory owing to its special lighting effects.

Best Hotels to Stay in Mumbai