Lying in the eastern Himalayas, the Park covers an area of 1057 square kilometers and is spread across the dzongkhags of Zhemgang, Sarpang and Pemagatshel in the south-eastern part of the country. Spanning across three districts and numerous villages, the Park delights tourists with a close insight into the local Bhutanese culture and tradition. The paradisiacal and luxuriant locales of the Park make it an ideal site for camping and allures travelers due to its intimacy with nature.

The Park is home to a wide variety of birds and animal species, including several endangered ones. Boasting the reputation of being one of the world’s most outstanding biological conservation sites, the Royal Manas National Park is also the country’s oldest protected sanctuary, and one of its largest national parks. The Park is extremely rich in biodiversity with over five different types of vegetation, which makes it the perfect habitat for a number of rare and endangered animal species like the Royal Bengal Tiger, Black Panther, Asian Elephant, Wild Buffalo and Clouded Leopard among others, as well as over 900 species of plants, fishes and birds.

Tourists visiting this park can also spot many globally threatened species like the Golden Langur and Pygmy Hog. From hiking in the lush green woods and getting acquainted with the diverse flora to going on an adventurous tropical safari on the back of an elephant where you can catch the one-horned rhinoceros in action, or just taking a relaxing boat ride and enjoying the company of the Gangetic Dolphins and exotic Mahaseers, the Royal Manas Park is a nature lover’s dream destination.

From the White-bellied Heron and the White-rumped Vulture to the Red-Headed Vulture and Rufus-Necked Hornbill, the Park has it all, and it is considered to be the home of around 70 percent of Bhutan’s bird population. This also makes the Royal Manas National Park a heaven for bird watchers. A visit to this ecologically and biologically rich and diverse Park is a once in a lifetime experience.

A List of Popular Wildlife Species Found in Bhutan

Other Top Tourist Attractions in Zhemgang 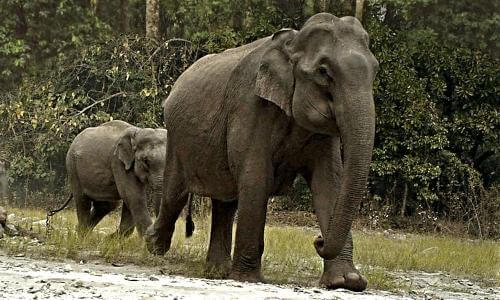