Fringed by lush emerald and green rice fields, the Gomphu Kora, also known as the Gom Kora, welcomes you to its pristine abode and calms your nerves with its tranquil atmosphere and peaceful ambiance. Situated right at the heart of the agrarian belt of Eastern Bhutan, the quaint hamlet of Gomphu Kora promises to take you on an enthralling expedition of rich mythology, history and culture.

This serene sanctuary is located at a distance of around 23 km from the Trashigang Dzong, the headquarters of the most populous district of Bhutan. The name Gomphu Kora literally translates to ‘Meditation cave’ in the Bhutanese language. It is believed to be the site of meditation of the revered Guru Rinpoche. According to a popular local tale, Guru Rinpoche defeated an evil dragon at this site in the 8th century by crushing it against the rock which left marks of the dragon’s body and skull on the rock. The locals also believe that the Guru hid a vase containing the water of immortality inside the rock, and it is considered a matter of great fortune and honor amongst the pilgrims to get a taste of the trickling water.

One of the most popular pilgrimage sites of Bhutan, the Gom Kora, with its vast collection of ancient murals and holy relics, has been at the top of the bucket list for devotees and pilgrims since times immemorial. The earliest religious figurehead to visit this meditation cave was Gongkhar Gyal. Tourists can see the marvelous ancient shrine at Gom Kora built by Gongkhar Gyal in the 10th century. The shrine was renovated in the 14th and 15th centuries by the famous saints Pema Lingpa and Yongzin Ngagi Wangchuck, who is also the founder of the Trongsa Dzong, respectively. The biggest attraction of the Gomphu Kora is the mesmerizing ‘circumambulation’ ceremony held here towards the end of March every year. The place comes alive with colors and grand festivities during this time of the year. A visit to the holy site of Gom Kora during this occasion will surely leave you speechless and your 6 senses satiated with the visual and spiritual spectacle of the ‘circumambulation’.

Visit this magical place which will reaffirm your bond with nature and your belief in the triumph of good over evil, and let these words be forever etched in your memories, ‘Go around Gomphu Kora today for tomorrow may be too late’.

Other Top Tourist Attractions in Trashigang 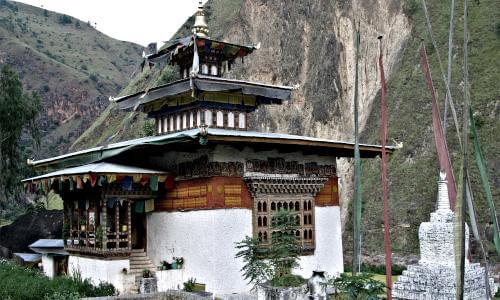